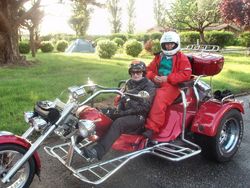 A Change of Scene

Like a good many of us who plunge straight into moving lock, stock and barrel to France, never having had a holiday home here, we underestimated the challenge of living in a foreign country.
For the two of us the move was more challenging than for most. Richard took early retirement; we moved to France and set up home together all in the same month, having known each other less than a year.
Richard couldn’t speak a word of French, missed his work colleagues and realised the enormity of renovating the property we had bought.

What to do? Join a club to make up for lost friendships? Preferably a French club so as to integrate and hear the language? Something that he really enjoyed doing to take his mind of the endless work and problems with French bureaucracy? 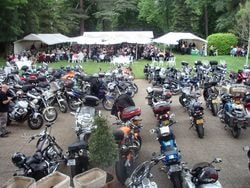 The solution; join the local motorcycle club. That was fine for Richard, an ex Isle of Mann T.T. racer, but I had never been on a bike before.
The first few outings were horrific for me. “You don’t lean into the bends from your neck upwards; you slide your bottom off the seat and tilt your body until your nose is nearly in the gutter,” I was sharply informed. At sixty four I may be a little old to take up this ‘sport’. Richards’s bike is a 1977 BMW and not very comfortable, nothing to lean back on for a start, a seat that felt like an unpadded bench and we won’t mention the suspension.
On a trip to La Rochelle with the club (no, I didn’t ride pillion all that distance, I followed with the car) I was given a ‘ride’ by a member of the host club on the back of his Honda Goldwing. Now this was more the business, an armchair to sit in and a built-in music system.
So perhaps if I changed my driver/bike I would like this pastime a great deal more.
Richard was in full agreement as he wasn’t altogether happy with me on the back, though he did say that I had progressed and was now only terrified 80% of the time, nervous for another 10% and actually enjoyed 10% of a ride. 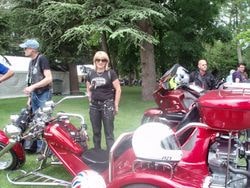 The answer to my problem came with Raymonde, a blonde, petite, vivacious French woman who owns a Harley Davidson Trike. Eureka! Three wheels and an armchair to sit in, total comfort, not much leaning, only the wind tearing at me (You sit up higher behind the biker on a trike). Now this trike is something to behold, all glitzy, sparkly cerise pink and chrome. It is so crass that it is enjoyably amusing.
So after a few shorter runs, one sitting behind Raymonde’s husband careering round the local lanes at 130km/h at well on midnight, Raymonde and myself, along with three hundred and fifty bikers set off round the Tarn et Garonne celebrating La Fête du Pain organised by the motorcycle club of Valence d’Agen. Divided into three groups we were welcomed by pre-arranged bakeries to crusty rolls, croissants, choclatines, choux buns, charcuterie and confiture. To quench our thirst we were offered fruit juices and endless cups of coffee (not a good idea for women on bikes) Lunch was a buffet spread that covered four long trestle tables under shady parasols in the grounds of the Chateau Montauriol, hosted by le Conseil Général du Tarn et Garonne. 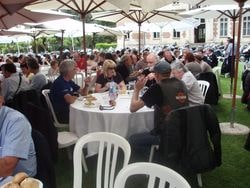 At this point I should mention that Raymonde is not to be outdone by her trike and at every stop en route throughout the entire day and evening, she used her wing mirror to touch up her make-up, adjust her hair and select another pair of designer sunglasses. This all complimented her fancy leather attire and mind blowing stiletto heel boots.
Hairy bikers enjoy a different reputation in France, where the traffic is brought to a standstill at junctions by the outriders to allow us through. So as we drove through the small towns and villages where the local population turned out to see the noisy cavalcade, Raymonde, myself and the trike were greeted with firstly looks of astonishment followed by excited waves and smiles. I, sitting behind the glamorous Raymonde, trussed up in an orange boiler suit regally and nonchalantly waved back. Whereas she pressed her horn, which sounded more like a wailing police siren.

I was elected vice president a couple of years ago and after five years here I am now beginning to enjoy this biking scene, it’s so crazy it’s funny. I should say that this is coming from an ‘ex-apprentice type’ high flying sales woman.
But then it is all part of the change of scene and the challenge of a new life in France.