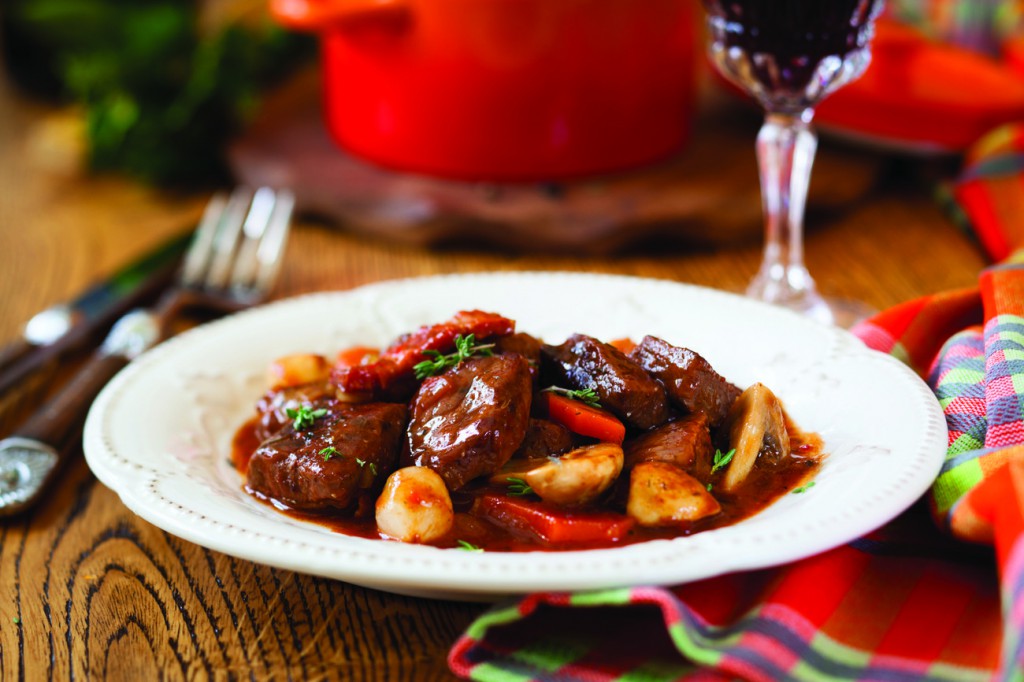 As the winter cold sets in, we turn to warming comfort foods to combat the seasonal blues. Amongst France’s wintry offerings is the ultimate stew – the iconic boeuf bourguignon, from provincial Burgundy – which boasts a rich synthesis of red wine, market vegetables and regional herbs.

Its ultra-slow cooking method arose from a need to tenderise cheaper cuts of meat. The beef is braised before being stewed with carrots, onions, garlic and a bouquet garni in an entire bottle of wine for hours, with mushrooms being added towards the end. Traditionally, the beef would have been ‘larded’ – a time-consuming method of threading fat into a cut, with lardons in this case – but today’s chefs mostly favour well-marbled, higher quality cuts. The meat should ideally come from Burgundy’s prized Charolais cattle, which are fed uniquely on hay, fodder and cereal to produce tender and flavoursome beef. Of course, the wine should also originate from the region, where pinot noir grapes are king.

This dish didn’t really emerge onto the international gourmet scene until legendary French chef Auguste Escoffier published his version in 1903, which used a whole piece of beef. Decades later, Julia Child’s book Mastering the Art of French Cooking featured a version which utilised cubed beef – her tome simultaneously propelled French cooking into the spotlight and resurrected boeuf bourguignon for a new generation.

This classic dish has stood the test of time and it continues, in undying Gallic fashion, to straddle the gulf between rustic fare and haute cuisine.