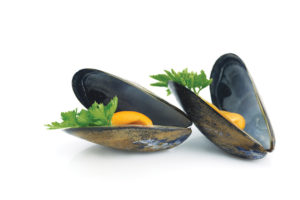 The secret to moules marinières is to use an entire pack of salted butter and an entire bottle of dry white wine. Add two large chopped onions and two shallots, a bay leaf and some whole black peppercorns. Cover and cook slowly with the lid on until the onions are soft, which makes them nice and digestible.

Clean the beards off the mussels, put them on top of the sauce and put the lid on. Don’t stir them – leave them to cook for seven or eight minutes, by which point all of them should be open – simply discard any that have stayed shut. Put a big bunch of chopped parsley on top and shake the pan quickly forwards to toss the butter on top of the mussels – if you can’t master this technique, stir it with a big flat spoon until all  the mussels are coated with the parsley.

And never, ever eat mussels with a knife and fork, instead, pinch them with an empty shell. This instantly separates the locals from the tourists!

The story behind moules marinières