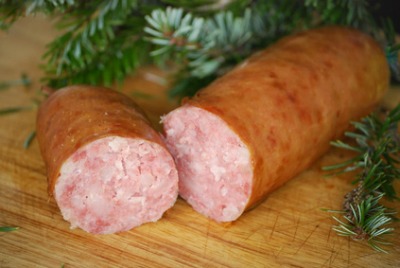 The region is well-known for its Comté cheese and ‘yellow wine’, but other local specialities like smoked ham and cherry jam help make any trip to Franche-Comté a real voyage of gastronomic discovery…

Morteau (above) – pork sausage from Morteau, smoked with juniper sawdust. The pigs are traditionally fattened with whey from Comté cheese making. Jésu de Morteau is a variety of Morteau with a more irregular shape.

Saucisse de Montbéliard – the oldest sausage in France. Lightly smoked and seasoned with garlic and cumin, it dates from the 14th century and is perfect with lentils or potato gratin.

Morbier (below) – rich and creamy cow’s milk cheese with a black vein through the middle, traditionally made in two layers and sandwiched with ash. 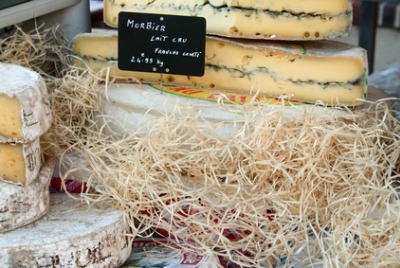 Jambon de Luxeuil – a top of the range dry cured ham from Luxeuil-les-Bains often served as a starter with melon and also used in salads.

Bresi – smoked salt beef has been made in Franche Comté since the Middle Ages and is a popular choice for l’heure de l’apéro.

Poulet de Bresse – top of the range AOC chicken from Bresse with distinctive blue feet, white feathers and red comb like a walking Tricolore. The birds are free-range, fed on corn and dairy, but also spend time in an épinette (wooden cage) in the dark.

Jambon fumé du Haut-Doubs – a lightly smoked, dry cured ham produced in the Jura mountains. Each one is dried for at least six months and is the perfect accompaniment to raclette.

Cherries – from orchards in Fougerolles. Used to make jam, syrup, desserts of all kinds, as well as kirsch. The Ecomusée du Pays de la Cerise in Fougerolles presents all you ever wanted to know about this industry.

Honey – the region’s pine forests and flowering meadows are ideal for foraging bees. Production dates back to the 18th century with pine and acacia varieties amongst the most common.

Straw wine (vin de paille) – grapes are dried on straw mats for several months to make them even sweeter, which is just what you want in a dessert wine.