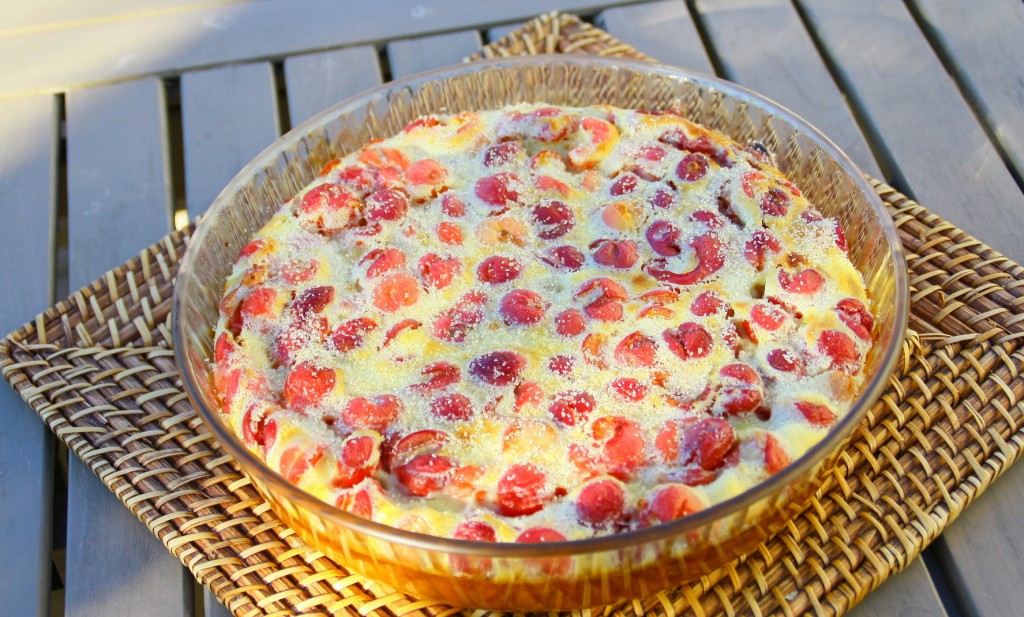 My French better half Vincent and I have been together for ten years. When we started out as a couple, I had a moment of dread at the thought of making that first meal for him. After a divorce and the loss of a house, I was now living my ‘paupered princess’ life in a small apartment – the kitchen in this small abode being nowhere near what I was used to. What I did have to my advantage was my cooking ability. Three kids who inherited my appetite had definitely had an impact on the type of cook I was.

Anyway, with my oldest son at university, my other son visiting his dad for the weekend, and my daughter spending the weekend with one of her friends, I figured a romantic dinner would lead to…perhaps…well…some ‘amour’!!

I focused on my menu. Something simple but refined. Avocado stuffed with onion vinaigrette; chicken breasts with morels, herbes de Provence and a light cream sauce; haricots verts; and cherry clafoutis for dessert along with a nice cheese plate. The perfect meal for my Gallic date!

Everything went as planned – my time management with the meal was impeccable. Vincent arrived and we had an aperitif. And another. The chicken was sautéing. I took the haricots verts off the burner to stop the cooking process. The timer went off to let me know that the clafoutis was finished baking.

Being just a tiny bit nervous and desperately wanting to impress, I lost my train of logical thought. The burner that the beans were cooking on was still hot. I placed the clafoutis, which was baked in a glass dish, on top of the not-yet-cooled burner. At the very moment that Vincent came over to see if I needed any help, the glass dish exploded. Did I mention it was a cherry clafoutis? Clafoutis on the ceiling. Clafoutis in my hair and on my clothes. Clafoutis all over Vincent and on the walls and floor! Sheepishly, I explained that all was not lost as the beans were out of harm’s way, the chicken was covered and the baguette was on the table.

In true American form, I smiled through it all. Then something else happened.

We sat down to the table. He had brought with him a very good bottle of red wine – the same color as the cherries in the clafoutis! He opened it and poured. I leaned over, trying to be coquettish and cute…and in doing so, spilled his red wine. All over the table and all over him!

By now my smile turned into a look of horror as I watched his face scowl with…well, actually it looked like hate! He got up from the table giving me a stare that I swear could have killed. He walked over to the kitchen sink and his body started shaking.

For that one moment, my heart sank. I really liked him, and a feeling of sadness came over me because I knew I never wanted him to leave. Tears came to my eyes, but when I glanced over at his shaking body, he turned around and I saw that he was laughing uncontrollably (which had me thinking – is this man really French?)

He walked over to me, looked me in the eyes and said – I swear I’ll never forget this – “I don know wha- ee eez abou ou, but zis eez zuh worse but funniest meal I ‘ev evarhhhh ‘ad een mah lif” (translation: “I don’t know what it is about you, but this is the worst but funniest meal I have ever had in my life”).

Ten years later and we’re still going strong. He makes sure that I don’t place hot glass where it shouldn’t be, and he makes sure his glass of wine is very far away from me! Oh…and we still laugh about that first dinner!