World-class art in the Midi-Pyrénées: Albi and Rodez 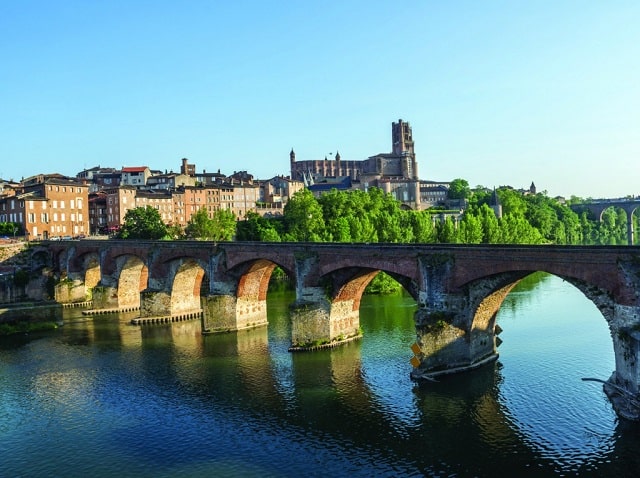 Readers who are familiar with my almost obsessive penchant for red bricks and duck will know that I needed little encouragement to enjoy an early-summer jaunt to Albi, as this small city in the Tarn aptly ticks both boxes. Its imposing, ocean liner-sized Sainte-Cécile cathedral is a behemoth beauty that’s certain to leave me agog, and is perhaps my most treasured French edifice – even the huge, spine-tingling Last Judgment fresco inside is riveting in its horror – and there’s always a duck dish or three on most menus to tickle my carnivorous French fancy.

Yet for this, my first visit in over five years, the calling was altogether more cultural. I was long overdue a visit to the refurbished Palais de la Berbie next to the cathedral – also a red brick marvel, one set over two floors, housing an extensive collection of the works of the town’s most famous son, Henri de Toulouse-Lautrec.

For such a small man, the party-loving, bearded brush squeezer, who lived and perished (at just 36) in a haze of insalubriousness and absinthe, had some serious local connections – mainly due to his aristocratic status and the influence of his wealthy family across certain parts of the Tarn. So before I got to Albi, I had a few house calls to make, each relating (one more tenuously than the others) to the great man’s lineage.

Firstly, en route from Toulouse, I popped into Château de Salettes, a stunning four-star hotel which belonged to Toulouse-Lautrec’s family in the 16th century. Set amid a Tuscany-like swathe of rolling hills, it’s a gem of a holiday hideaway to which I vowed to return, for a more-than-fleeting browse of its sumptuous rooms and Michelin-starred restaurant.

Next on the Toulouse-Lautrec family trail was an altogether more poignant and personal visit. I’d met the tiny, warm and charismatic Nicole Tapié de Celeyran, the familial custodian of the painter’s childhood home Château du Bosc, over ten years ago. And here she is still, probably pushing 90, yet guiding me with undiminshed gusto around the public rooms of this grey-stone country mansion.

She ushers me to the young painter’s bedroom, to show me his toys and the drawings of hunting scenes he essayed after the two accidents which stunted his growth. After kindly posing for a photo and generously signing a tome on the castle’s history, she waves me off into the balmy Tarn afternoon.

The next piece of the puzzle is found at the castle-fort of Mauriac, where the artistic spirit lives and breathes in the gregarious guise of Bernard Bistes, himself a gifted painter who has been lovingly restoring the former home of Toulouse-Lautrec’s cousin, Alex Tapié de Celeyran, for 50 years. I find him a compelling character – if my French serves me correctly, Bernard appears to claim that he can make lightbulbs blow with his own creative energy!

The next morning, in lovely Albi, less shattering but equally colourful revelations abound. The town’s Golden Age was 1450-1550, when the pastel (blue colouring from yellow flowers) from the Pays de Cocagne used in prestigious artworks made it wealthy. These days, it’s the lovely boutiques and a fine indoor market that fill local coffers. 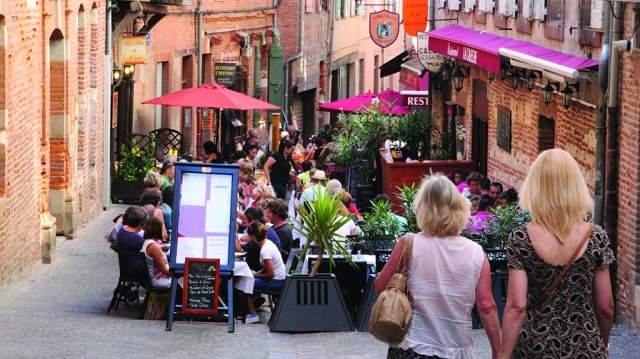 I amble into pretty courtyards and cloisters (I’m told that locals enjoy a picnic in the tranquil gardens of the Collégiale St-Salvi) before reaching the cathedral, the Catholic church’s aggressive stance against Cathar heretics. With its 78-metre bell tower, this Southern Gothic masterpiece took 200 years to build and was finally consecrated in 1481. Inside is equally eye-popping – the Last Judgement frescoes and the beautiful Great Organ are unmissable.

The Palais de la Berbie next door rounds off things in suitably arty style. The former bishop’s palace became the Toulouse-Lautrec museum in 1922 and reopened in 2010 after major renovation. This museum boasts over 1,000 examples of Toulouse-Lautrec’s art, including early pieces and his celebrated posters and works detailing the more unseemly side of Parisian life in the late 19th century (see the boxout, opposite) – it’s a must-see and a fitting tribute to Albi’s famous son. Also keep an eye out for the well-preserved, 13th-century glazed terracotta tile floor, which was discovered during the renovation. It lends yet more prestige to this most impressive of museums.

Jollied by a wickedly inventive dinner at L’Esprit du Vin, the next morning I leave Albi for Rodez, Aveyron’s capital, which is just an hour’s drive away, due north-east.I’m early for my tour of the town’s flagship new art attraction, the Musée Soulages, so I revert to my default activity in any French town – heading to the market to sniff around local specialities, pester the friendly stall holders of Place du Bourg for photos and take pointless snaps of giant tomatoes.

Easing through the town’s tight medieval streets, which are thronged with produce-laden shoppers, I pass Notre Dame Cathedral and make my way down to the museum, which opened earlier this year, amid much fanfare. Unsurprisingly, the townsfolk needed to be convinced of the merits of forking out millions to house the abstract works of Pierre Soulages during a financial crisis. Though perhaps unfamilar to some outside France (including me, I must confess), Soulages is big box office in the art world – his acclaimed pieces sell for millions. The museum is already a huge success, with its first-year visitor figure hitting target within just six weeks.

Tastefully housed in a series of steel boxes – each one dedicated to a certain period or style of the artist’s work – it sits atop a hill in the Foirail garden. My excellent guide gently convinced me of the merits of some of the ‘black’ works, which play heavily on reflection, texture and light. I preferred the occasional splashes of blue or ochre, as well as Soulages’ designs for the stained glass windows for Conques’ Abbatiale Sainte-Foy. Yet I was won over by the museum’s grandeur, scope and ambition. It’s pleasing that a provincial outpost (see also Lens with its Louvre off-shoot) will serve as a focal point for showcasing acclaimed contemporary art, and the museum’s glowing reputation will surely boost the town’s visitor figures. But more than that, it’s a new-found source of Ruthenois pride – the enrichment of the soul has no price tag. 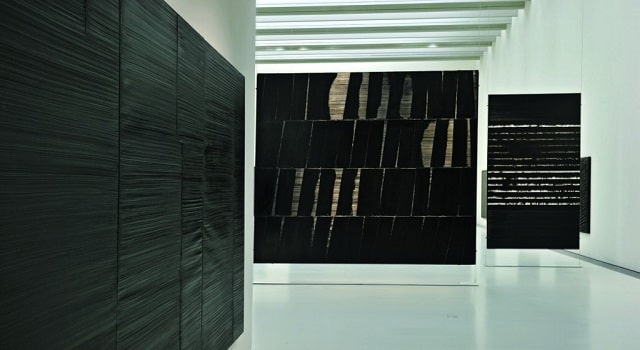 After a rapid lunch at the park’s excellent le Kiosque restaurant, I pick off the town’s key spots at my leisure. The market crowd has dissipated and there’s a languid feel to the town on this sleepy summer’s afternoon.

I head for the red sandstone Gothic cathedral, guided there by its intricate bell tower, inspired in part by Rouen’s Tour de Beurre (‘Butter Tower’). The choir and the vast nave were built between the 13th and 16th centuries – inside, the contemporary stained glass and the organ’s stunning wood carvings are unmissable.

Many fine private mansions and historic townhouses are dotted around the old town – they’re worth seeking out, as is the Bishop’s Palace – while the Musée Fenaille provides insight into local archaeology and history through its collection of menhirs and artefacts. My visit ends in the sublime courtyard of the Hôtel de Jouéry.

Emerging into the afternoon sunshine, I head for the Place du Bourg – all traces of the market now gone – to order a beer and raise a glass. Here’s to Musée Soulages, may she seduce new fans into falling for Rodez’s blend of laid-back lifestyle and architectural intrigue.

Previous Article The joys of hiking in France
Next Article People Watching in the Place Dauphine, Paris