A wine romance in Bordeaux and Cognac 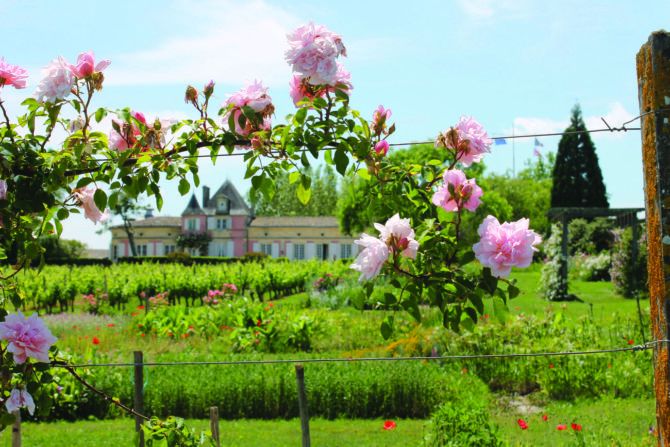 In her tour of the picturesque South West, Gina Dyer heads inland to Bordeaux and Cognac to sharpen her wine-tasting skills – and receives an impromptu proposal…

Like many people, I enjoy a glass of wine but know little about where it comes from. A little light reading on the ferry revealed that there are 57 appellations in Bordeaux, and more than 10,000 wineries, 150 of which are Grand Cru Classé – we had absolutely no idea where to start. We decided to put ourselves in the hands of the experts and called Xavier at 33Tour, a local agency specialising in personalised tours in St-Émilion, Margaux, Pauillac, Medoc and all Bordeaux vineyards. In addition to group tours, Xavier offers a bespoke one-on-one service, which we preferred, as we wanted to be able to ask silly questions without anyone else hearing.

“In Bordeaux, there are two religions – wine and foie gras,” Xavier joked. I tried to sound intelligent by asking lots of questions about grapes. However, it turns out that in Bordeaux, the appellation is more important than the grape variety. Cabernet Sauvignon is probably the best known of these, and for our trip we selected Médoc, which is most famous for red wines.

If you’re thinking of booking a wine tour, September is harvest time, making it ideal for a visit, although it can get crowded. May to June, which is when we visited, offers nice weather and a less crowded touring experience.

What makes Bordeaux wines so special is that their production is governed by strict rules. Wine producers here are banned from irrigating the vines so the quality of the vintage depends a great deal on the weather conditions that year – which is what makes some vintages more valuable than others. Conversely, wine producers in places like California and Australia face no such regulations, so they can produce the same wines year in, year out. “Fine for them, but it’s not our tradition,” commented Xavier.

Tradition is a word that comes up a lot at the châteaux we visit. Château du Tertre, one of the Grand Cru Classé, is our ﬁrst stop – 80 hectares of gorgeous rolling countryside, including 54 of vines. The estate was founded in 1830 by Peter Mitchell, an Irishman, who later created the shape of the bottle that has since been used for all Bordeaux wines. Today, it’s owned by Albada Jelgerman, the Dutch businessman who founded Spar supermarkets.

The wine tasting begins with a 2004 at the spectacular Château du Tertre. This particular wine can be aged for up to 10 years in the bottle and works well with lamb, duck, and foie gras. Our host, Emily, told us that sampling the wine with food from the same terroir really brings out the taste. She also explained why cheese is frequently accompanied by wine – its proteins help to lower the tannins in the wine. Since there aren’t any cheeses produced in Bordeaux, goat’s cheese from the Pyrénées is a perfect accompaniment, as is Auvergne cheese, but as Emily advised, “forget Camembert or Roquefort because these are too strong and will overpower the wine.”

For lunch, Xavier took us to Café Lavinal in the Village de Bages. This pretty little place looks like the archetypal storybook French village of yesteryear – except it was all created just ﬁve years ago. The place was purchased by an Irish owner, after whom the Château Lynch Bages is named, and renovated with painstaking attention to detail. Café Lavinal, located in the heart of the village, is a quaint restaurant featuring local cuisine and, of course, the region’s most celebrated wines. We enjoyed the €18 lunch menu, which included a goat’s cheese salad, followed by Pyrénées black pig, a ﬁrst for us, which proved to be incredibly succulent and juicy. 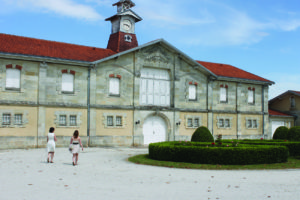 Next, we headed north to Château Loudenne, a family-run winery and B&B located on the Gironde estuary. As we set off, Xavier warned, “When you see this place, you will fall in love with it.” I scoffed a little at this, but when we got ﬁrst sight of Château Loudenne’s pink chartreuse, rose-covered entrance – the birds were singing, the sun was shining… damn it, Xavier was right. I wandered around open-mouthed, looking at the little turrets, the landscaped garden and sun trap patio. The place was magical. We were greeted inside by the lady of the house, Madame Lafragette, who told us that the château was founded by a French family in the early 17th Century. In 1875, it was bought by an Anglo-Irish family, who were the ﬁrst to produce Sauvignon Blanc wines in the region.

Over a glass of the aforementioned wine, she regales us with the story of Robert Bemford, a former owner of the house, who died on the premises. After purchasing the property, the Lafragettes decided to throw a party in his honour. Upon going to bed that night, Madame Lafragette swears she heard a round of applause, despite the fact that there was no one in the house. Coincidence? She doesn’t think so – it was Bemford’s thank you for the party. I love French people!

Loudenne was the ﬁrst estate to establish a school of wine, and Madame Lafragette takes us to their tasting kitchen, where we sample Château Loudenne White, a beautifully crisp and fruity wine that’s ideal for beautiful sunny days like this one. She also proudly presents us with a glass of Pink de Loudenne, the fi rst wine produced by her daughter, who has taken over the family business. This rather girly-looking rosé is made from Merlot grapes and is a pleasant surprise on the tongue – fruity and buttery at the same time. At this point I planned to move here and ask Madame to adopt me but, sadly, we had places to go.

Cognac isn’t something I would usually drink at home – it’s very expensive and has always struck me as too posh, the sort of drink you might have at an ambassador’s reception. However, I decided that if I was going to try cognac, then the Rémy Martin estate would definitely be the place to do it.

Acclaimed the world over for its champagne cognacs, Rémy Martin is also a leading producer of liqueurs, wines and spirits. The brand’s origins date back to 1724 and its rich history lives on in its estate in Cognac, which is well worth a stop-off.

Our tour guide, Hugo, explained the process of creating cognac, from the specific blend of grapes used (theirs is the only blend protected by the Appelation d’Origine Contrôlée), to the oak barrels made in Limousin in which the blends are aged.

Rather excitingly, there’s a little train which we all get on to tour the site, which is absolutely massive, so walking is a definite no-no. We stop-off at the cellars where the cognacs are aged – the smell is rather strong but not altogether unpleasant. A hushed silence occurs when we enter the cellar where the Louis XII Grand Champagne is kept. This is their most renowned cognac, made specifi cally in honour of the monarch and mastered over four generations. The cognac is bottled in a Baccarat crystal decanter and will set you back about €2,000 – a snip considering they’ve been nursing some of these barrels for over 100 years!

In search of a place to park our campervan for the night, we ventured towards Cap Ferret, a little seaside gem that’s somewhat off the beaten track and offers stunning views of the Atlantic coast. This small sandy peninsula, south of the Médoc, 30 miles west of Bordeaux, is a peaceful place to stay off-season. To the east, the Bassin d’Arcachon is home to some of the fanciest antique yachts I’ve ever seen, and to the west is the beach, with miles of beautiful Atlantic coast. If you’re into sports, Cap Ferret has lots to offer – it’s ideal for surfing, sailing and many other watersports. In addition, the pine-scented forests offer miles of cycling trails and bike hire places are everywhere.

Our stop for the night was Airotel Les Viviers, a well-equipped, family-friendly campsite with a gorgeous view of the ocean. As we unloaded the campervan and cracked open a bottle of the region’s fi nest red, I looked out at the twinkling ocean in front of us and noticed that my partner, Lawrie, had fallen over. It was quite funny, until I realised that he was actually down on one knee with a hollowed-out, ring-shaped wine bottle top in his hand.

“Shall we get married, then?” he asked, in his nonchalant West Country way. After he asked another eight times, I finally believed him. And so I left Cap Ferret in an ecstatic mood, with a fiancée and a ring made out of wine bottle foil. Of course we’d have to do something about getting a proper ring when we got home…

A winemaker in Provence put sunshine in a bottle

Learn how to taste wine