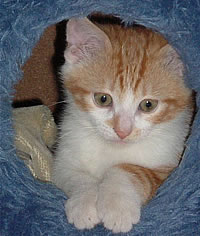 Belle, Buster, Bazil and Nounours arrived on 27th April 2006 from Lascabanes in the Lot department. The four kittens were just 1 week old and had been found in a field by a farmer who would have cut them to shreds had he not seen them. He waited several days for the mother to find them but in desperation and concern for them he contacted the Cat Rescue and Rehoming Charity.

Being raised with a bottle posed no problem for 3 of the kittens but poor little Nounours was just too weak and she sadly died.
At the end of May they had all reached an age where they were feeding themselves, eating biscuits and meat, and each other!! They were ready to go to good homes themselves. Belle was the first to leave, she was such a pretty brown, peach and cream kitten that she was not difficult to rehome, amongst tears of farewell she went off with her newly found owners.

Buster was next. A magnificent long-haired ginger Tom, so cuddly and soft he found a home near Miramont de Quercy, where he is spoilt and treated like a lion king! We visit him often and he always remembers us by jumping up and giving a big cuddly hug.

Bazil was the last and perhaps the most “normal” (looking at least) little ginger and white male. A very special place was needed for Bazil as he was always the most mischieveous! After a few weeks he chose his place with a lovely couple, a local artist and his wife, who were so pleased to find a young companion for an older black moggie. Sadly after only 2 weeks Bazil returned when his owner was suddenly taken ill with heart problems and who still remains in hospital.
So Bazil is still with Lynn. He is a very demanding cat who is never sure if he is human, feline or canine as he plays and chases Lynn’s labrador too. Every morning Bazil lies outside her bedroom door patiently waiting for the alarm clock to ring, as soon as the door is opened Bazil leaps on the bed and gives very un-catlike sloppy licks. He is and always will be very close to Lynn as being fed with a bottle for 3 weeks by her, he thinks she is his Mum.

His favourite time is after the children are in bed and Lynn is trying to catch up on computer work, he knows that she will be sitting for a while so comes for a big cuddle and hug.