Life After Brexit: Moving to France During a Pandemic 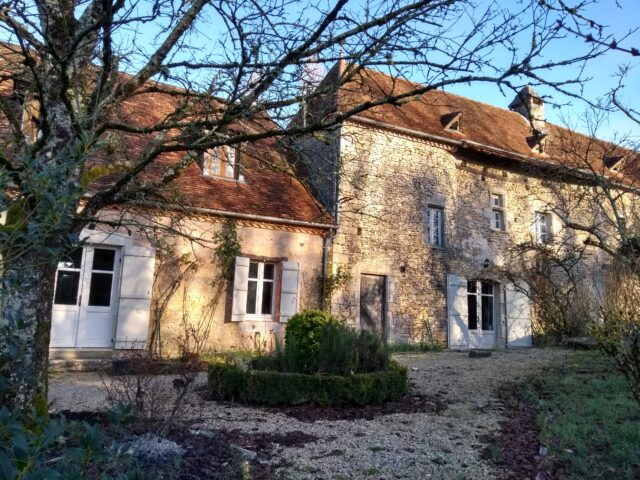 In our new Life After Brexit series, we look at how British expats in France are facing life post-Brexit. What are the personal and professional changes and challenges that lie ahead for small businesses, homeowners, and retirees?

In our third installment, FE contributor Charlotte Visser tells her own story of moving to the Dordogne with her son. The idea was to move and settle in France before the Brexit Withdrawal Agreement came into effect… but of course, she ended up hunting for a French property and moving home right in the middle of the pandemic.

Finally, our big day has arrived. We are completing the purchase of our dream home.  From behind his surgical mask, the notary offers his felicitations and presses a flat modern key into my hand, followed by a squirt of sanitiser. An entire year has passed since the day of our arrival in France, a time when ‘le virus’ was just a drone on the car radio.

At the new house, my son fumbles with the key for a very long time as the camera clicks. The swollen doors let out a shriek and give way to a cavernous space as cold and damp as the winter’s day. The only light enters through the gaps between the tiles on the roof. Light fittings and bulbs have been removed by the previous owners. The door handle to the kitchen comes off in my hand. We have to use our phone torches to open the windows and shutters. I notice that I have inherited one unwieldy bookcase, one Narnia wardrobe cocooned in cobwebs, and a pile of old parquet.

The view over the orchard falling towards the village church is a masterpiece and I remember why I fell for this house; this painterly view and the cyclamen in the garden. Today a mist lingers in the valley. You get views like this in the North Cotswolds, my home in Britain, but the fine views are the preserve of the likes of Liz Hurley and London financiers. Here, in the Dordogne, they can be for a penniless writer to call her own.

It’s easy to forget all about Covid in this glorious countryside, but it has marked our first experiences of La Douce. If the bureaucratic processes of immigration are laborious and circumspect at the best of times, these have been even more infuriating during the pandemic. Instead of exploring the countryside, learning French and making new friends, we have been confined to our rented hilltop. I came to the Dordogne to be close to my family, but they seemed further away than ever during the lockdowns. House-hunting was off the cards. Still, we have felt privileged and we have felt safe.

After the first lockdown, there was talk of a great rush by city folk to buy up country properties. A dozen houses that had been on the internet for a long time finally disappeared. Others were not so lucky and await their fate sparkling under pylons, or trembling along busy roads. More often than not, owners are holding out for an unrealistic amount of money. There seemed to be very few new properties coming onto the market. Owners of second homes decided to ride out the pandemic in the relative safety of the countryside, particularly if they were able to work from home or take early retirement. Some vendors recoiled at the idea of Covid-infested punters visiting their homes. Where, oh where was the coup de cœur for which I had left my beloved England?

In October, between two lockdowns, I finally found my much-fissured home with its dragon gargoyle. Fortunately, the second lockdown was less restrictive and the workings of the sale were able to proceed normally.

Before the move to France, I thought that Brexit would be my main hurdle. It now seems a very long time ago, but I worried a great deal about being able to bring my animals to France before the rules changed. I obtained a commercial export licence from Defra for my two pet ducks, Tilly and Hattie, who dozed in the back seat as my satellite navigation directed me onto the périphérique intérieur in Paris.

As English speakers, my son and I incited sheer panic in grass-root officials at the Mairie and the bank, even though the rules and regulations were supposed to remain the same until 31st December. On presentation of our Dutch passports, relief swept across their faces. My biggest regret with regard to Brexit, is that I will lose my EU resident status in Britain at the end of another year in France and won’t be able to return as a matter of course.

For now, I won’t have time to worry about Covid or Brexit. I am too busy scrubbing the black mould from the walls in the attic. As I write, the old parquet is chuckling in the inglenook (our only form of heating). Tomorrow morning, I will wake to a wonderful view. In the Dordogne, I too can live like a famous swimwear designer!