I thought France would be like England, but I was in for a shock! 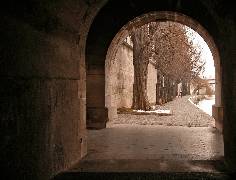 British-born Liz Turner, now a teacher and translator, has lived in France all her adult life. After graduating, she set off on a world tour but somehow got stuck at first base. Meeting her husband in the first few months of her stay may have had something to do with this! They have been together ever since and now have two student-age children.
Familiarity has not yet eroded her fascination with the differences between the two cultures, and she takes a lively interest in matters relating to identity, culture, language, and the problems faced by expatriates.
She has travelled widely in Europe, and hopes to venture further afield now the children are grown and if she ever overcomes her fear of flying. Liz writes…

‘When I first came to live in Paris twenty-seven years ago, I naively imagined it would be, broadly speaking, similar to England, but with a French accent. That is to say it would be a bit warmer, have more interesting food, better scenery, sexier men and a certain je-ne-sais-quoi that was totally lacking in rural Suffolk. It was, after all, a mere twenty-five mile hop across the English Channel.

I was in for a shock. It was different in an incalculable number of ways.

To start with, it even smelt different. No sooner off the boat train at the Gare du Nord and your nostrils were hit by a pungent mixture of Gauloises tobacco and strong coffee wafting out of the cafés and over the pavements. Then there was the garlic breath of the blue overalled workers on the early metro, the yeasty smell of the bakeries, and the clean smell of the freshly-washed pavements first thing in the morning.

It certainly looked different. French apartment blocks had shutters at the windows, heavy front doors opening onto cobbled courtyards, wooden staircases spiralling up the centre, and surprisingly, for a nation that worships food, tiny kitchens. In less well-off areas, shared hole-in-the-ground toilets on the landing were also the norm. If you were lucky, you got exposed beams in the ceiling by way of compensation.

French cars too were different. They were almost always French, for a start. Cute little round-topped Citroën 2CVs still zipped through the streets, there were buses with platforms at the back and a universal and cavalier disregard for pedestrian crossings and other inconvenient obstacles to motoring pleasure.

Because pleasure, is of course, a foundation stone of French culture. And this brings us, of course, to food. Though frogs’ legs and snails were less common in reality than in the British imagination, other rumours proved true: garlic was prevalent, wine drunk by the bucketful and meat was eaten bloody, sometimes even raw. What’s more, every shopping street boasted a boucherie chevaline; not, as I at first imagined, a chain of butchers’ shops owned by a Monsieur Chevaline, but purveyors of horsemeat. The horror of it!

In exchange, every French person you met had a horror story to tell about dining exclusively off green jelly and boiled meat and marmalade on a never-forgotten school trip to England.
Then there was the language of course, and the illuminating discovery that though capable of reading a Molière play and writing a schoolgirl essay on it, I was unable to order a cup of coffee without a spluttering and blushing.
And I haven’t even started with the differences. In short, there were enough of them, large and small, to fill a book and keep the visitor goggling for many a long month.

In my case the long months turned into years. I stayed on, married, took French nationality and had children, events that revealed in turn the yawning gulfs between the legal, medical and educational systems of the two countries.

Time and the European Union have gone some way to eroding the differences. Anti-smoking laws have been introduced, French plumbing has been modernised, and sadly, apart from the shutters, a modern French apartment block looks much like an English one. Parisians have adopted brownies and muffins, and peruse books dedicated to the making of crumbles and trifle. Technology has leapt ahead in France. Public telephones work. High-speed, on-time trains link major cities in breathtakingly little time, whilst wonderful Eurostar links England to the Continent in just over two and a half hours.

Urban violence and problems of unemployment beset both countries. The English retire to France, and legions of young French graduates make the reverse journey, gravitating to London to find work.

These days, there are fewer differences. Many are superficial: windows open inwards, not outwards, and lack windowsills, New Year, rather than Christmas cards are exchanged and sent any time before January 31st, the French traditionally prefer square pillows over rectangular ones, French cookers lack an eye-level grill.

And then there’s the small matter of the decimal point. The French use a comma rather than a point, so, for example, the British 250.50 becomes 250,00.

A really tiny detail you might think. But a devilishly important one as I was to find out to my cost. Returning from holiday one day, I was confronted with a letter from the taxman. A small savings account that had been quietly minding its own business in England had been declared to the French authorities (how very mean!) and tax was due on the interest.
It was not so much the discovery of the account, however, but the amount due that left me shell-shocked. A phenomenal sum. Disproportionate. Unpayable.

I spent a sleepless night. But, as the French say, ‘la nuit porte conseil’. In other words, sleep on it and the solution to your problem may well pop into your head in the morning.

On examining the evidence the next day, and forcing myself to do the sums, I found that in fact, the French authorities had misread the amount of my savings, somewhat to their advantage, precisely because they had misunderstood the way the British express the decimal point.

An appointment was made with the tax inspector, the optimistically named Monsieur Boncoeur (Goodheart). The evidence was produced and the mistake explained. Monsieur Boncoeur seemed convinced, not to say fascinated. Further examples of British mathematical eccentricity were produced. Primary school examples of long multiplication and division (which the British do ‘back to front’) were performed for his entertainment, and true to his name, Monsieur Boncoeur chuckled benevolently and declared himself unsurprised that the British drive ‘on the wrong side of the road’.

More to the point, he promised to rectify the error, and dashed off a memo on the question of decimal points for the benefit of his colleagues. Thanks to my timely intervention, he explained, hundreds of my compatriots in his administrative area might be spared such heart-stopping experiences in the future.

The moral of this tale, therefore, is threefold. The devil is indeed in the detail, primary school maths may one day come in useful, and French tax inspectors are not the total ogres they are sometimes made out to be.

Liz Turner is part of Expat Women, a website for women living overseas, offering advice and information, mentors for country-specific help, real life stories and a chance to meet others.