In a class of their own in Tarn: Real Life in France 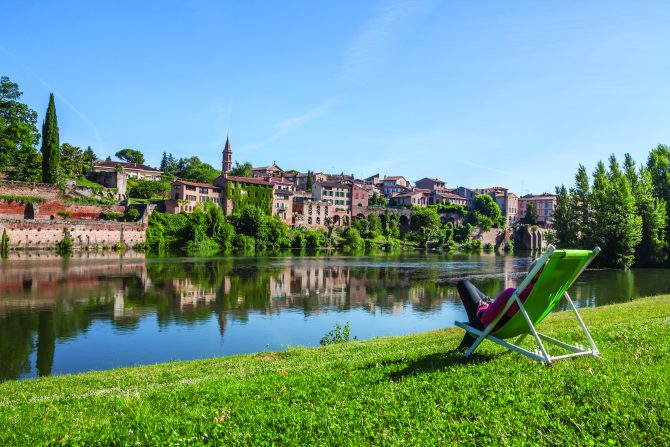 When Vicki and Jon Carah first fell in love in Exeter, they had no idea that they would also fall in love in France – with a particular property and the spectacular area of Tarn. Annaliza Davis interviews Vicki about the family’s move to France and the long wait to make it happen.

Many of us browse the local houses for sale when we’re on holiday in France, but Vicki and Jon Carah took this to a whole new level. “We first came to France for a holiday together back in 1996 and immediately started dreaming about living here, looking in estate agents’ windows,” recalls Vicki. “After that, we holidayed in France every single year until 2014, going to property shows, reading magazines and poring over websites avidly during that time. It went way beyond daydreaming, it was serious research!”

Originally from Sussex, Vicki met her future husband Jon in Exeter, where they had been university students and both went on to develop successful careers teaching geography there. “We desperately wanted to relocate to France, but we loved our jobs. We were also concerned about leaving our elderly parents and moving William and Jacob, our children, overseas,” explains Vicki. “I think it’s probably the same for a lot of people who want to move abroad.”

The Carahs continued to visit France every year and to do their research, never losing sight of the dream. Years later, after Jon’s father passed away, it seemed to be the right moment to take the plunge and relocate to France.

“Our elder son, Jacob, had started at university and our younger one, William, was 12, so we felt he was still young enough to make the move without too much disruption to his schooling. At the same time, Jon had just reached early-retirement age, which meant we could at least have a small, regular income to start us off. It was time to make the move.”

“Over the years, we had visited lots of areas of France and, of course, each region has its own appeal. As geography teachers, we had compiled a fairly definite list of requirements: we wanted a climate with four distinct seasons, somewhere hilly but not mountainous, reasonably accessible for airports and other transport links, and an isolated property surrounded by countryside but with a decent urban area nearby.

“We found the Alps too touristy and too mountainous for us to live in all year round; we liked Brittany but wanted to live further south; and we liked Poitou-Charentes, but felt that all the areas we knew had developed too much over the 20 years we had been visiting. It seemed that the area previously known as Midi-Pyrénées would best suit our requirements – particularly the département of Ariège.

“Ever since our very first French holiday, we’d continued to look at houses for sale on various websites and in magazines, and we’d also kept in touch with one of the estate agents we’d met at a London property show. She sent us details of several appealing properties, so when the time came, we rented in Ariège expecting to end up in that area, but we didn’t see any properties we liked there at all!

“That estate agent took us to nearby Tarn for a day to view three properties and we fell in love with the first one she showed us! As can happen when you’re on the spot, the house hadn’t even been put on the market at that time, but we made an offer and the very surprised owners accepted. So we bought it and we still love it – and we became very good friends with the estate agent, too!”

The property the Carahs fell for was located in Mirandol-Bourgnounac, 30 minutes north of the picturesque town of Albi, Tarn’s capital, and an hour northeast of Toulouse airport. Summers can be hot and dry, while winters can be cold, wet and windy, so there are definitely the distinct seasons that they were looking for. But what about the house?

“Jon and I particularly wanted an old character property with extensive grounds and good views, envisaging something totally isolated with land all around it. I definitely wanted a swimming pool and a big kitchen for gathering in. “Our house fulfils most of what we were looking for, but to be honest it was an absolute coup de coeur: it was love at first sight and our checklist got discarded! It doesn’t have the huge kitchen I’d imagined, but there is a breakfast room next to it, and it’s not totally isolated as there’s a farm and three other houses about 400m away, but we are good friends with everyone there. It has also brought the enjoyment of having company not too far away, as well as the unexpected bonus of local festivities such as the hamlet’s annual lunch.”

Naturally, everyone who moves to France believes they have found the best spot, and Vicki and Jon are no different, saying that Tarn suits them very well indeed, as does this house. It’s a large, renovated farmhouse built from local stone, complete with exposed stone walls, wooden beams, original fireplaces and those blue shutters that are part of the French dream. Its spacious gardens include a fabulous outdoor swimming pool and border a forest and a river, so it’s no surprise that the family regularly enjoys outdoor activities.

Originally, Vicki and Jon considered starting a holiday rental business and looked at properties with gîtes, as well as houses with potential for creating an income. They even looked into the option of buying a second, smaller property to rent out. However, having fallen in love with their farmhouse, they needed to come up with a change of plan to generate the extra income they needed.

“Not long after we moved in, a friend suggested we contact a national company called Daily English,” says Vicki. “They work with English-speakers based in France to organise language stays for French teenagers. With our teaching background we realised that this was far better suited to our skill set than running a holiday business, which we knew nothing about!

“William was 13 at the time, so it made sense to earn a living that worked around us as a family. It’s hard work, but you can choose how many weeks a year to do and how many students to have. We initially took two students at a time, but since our renovations have been completed we can take four, and we prefer that.

“It is very different from the teaching we used to do in the UK – partly because the students are staying in our home and partly because of cultural differences, as the French education system is so much more formal. In our first summer of doing it, I made two French children cry because I asked them to be creative and enterprising!”

The Carahs have now completed six summers as a host family, welcoming over 150 students, with many returning year after year. William, now 20, has grown up spending time with students from all over France, and he has become a valued member of the team, organising social events and charming parents with his bilingual skills. It’s become a family affair, and an integral part of their life in Tarn.

“Since we began, we’ve developed our own programme of lessons and established our own routines, teaching for an hour or two in the morning, then spending afternoons enjoying outdoor activities and sharing British cuisine. This pattern means we can also find time to enjoy our own hobbies and activities even when we’re really busy, so it’s very rewarding. There’s also a lot of autonomy and flexibility, so we can choose how many students we take and on what dates, but we also have the security of an official structure behind us, sorting the legal paperwork and payments. It suits us a lot better than if we’d ended up running gîtes!”

So, given that they found their dream property, an ideal way of earning a living, and a region bursting with character and picturesque scenery, will the Carah family be moving back to the UK in the near future? “Not a chance!” is the answer.

Inspired to move to Tarn?

Browse our properties for sale in Tarn, find inspiration from other real life stories, and seek information and guidance from experts

Properties for sale in Tarn