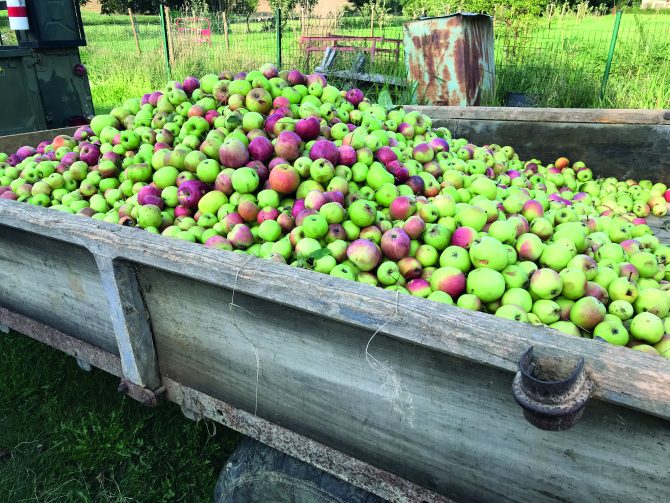 When you think of cider in France, the regions that spring to mind are likely to be Normandy or Brittany. You wouldn’t expect to find a producer at the opposite end of the country in the foothills of the Pyrénées, and yet it is here in Gers, in what was once Gascony, that Stuart Scott set up his Pointy Head cidrerie and brasserie (PHC). As George Bernard Shaw wrote in Man and Superman: “The reasonable man adapts himself to the world: the unreasonable one persists in trying to adapt the world to himself. Therefore, all progress depends on the unreasonable man.”

Stuart first moved to France back in 2003. His job had come to an end in the UK, and since his parents owned a house in this corner of France, he thought he’d give it a go. A trained carpenter, a trade that followed his military career, resulted in work offers right away. Initially he thought he’d move on to Spain or Italy, but Cupid had other plans and her name was Céline, who became Stuart’s wife.

Becoming rooted in Gers and after working for a few years for local roofers, which involved further training, Stuart started craving autonomy. One thing led to another. First came a ruin to renovate in Aux-Aussat, then the neighbour’s farm he was helping to look after came up for sale – it was a natural progression. But there was a cloud in the otherwise sunny French sky… a longing for good English cider.

About four years ago, Stuart bought a few apple trees from the UK for personal consumption. He also procured the Haynes manual The Practical Guide to Growing Apples, Cider Making and Enjoying Cider, as well as every other book on the subject he could lay his hands on. Three weeks later, another batch of 24 apple yearlings showed up. “My wife went nuts,” Stuart says, “what the (bleep) are we supposed to do with all these trees? It turns out there had been a mistake, I hadn’t ordered them, but I thought, oh well, let’s carry on then.” As the new owner of the farm next door, he knew that the land hadn’t been in use for a good while. But the grassy patch quickly came to life with rows of apple trees that have grown in leaps and bounds and now number 330. It quickly became evident that what had started as a hobby four years ago, just to make some cider for home consumption, was rapidly developing into something more. The first hobby batch of 30 litres has grown to a full-scale production, with a target of 1,000 litres this year and a long-term goal of 6,000 to 7,000 litres annually. A second 600-tree orchard near Pau is in the pipeline, taking the total of apple trees to 930. Plus Stuart’s craft beer operation is cranking out around 1,500 litres, with plans to expand but always staying under 10,000 litres a year to remain within the craft category. The numbers speak for themselves.

Gers is a very rural département, and local specialties largely revolve around anything to do with duck. Farming neighbours of the emerging cidrerie were as puzzled as they were amused, telling Stuart that he was mad, that he’d never grow apples there. But there was method in his madness. “I had done a soil test, and it came up as mostly clay, so some crops won’t grow here, but for apple trees, because the roots grow on the surface, it’s actually quite good. So, where some people would struggle to grow cereal crops, actually, my apple trees grow really well. At the moment, they are probably over a year ahead of their age.”

It started off as a small, home-brewing outfit, then came the extra trees, and then more trees, and the idea started to take form that perhaps it would be possible for Stuart to eventually stop working at his other jobs, including short stints abroad, and devote his time entirely to PHC.

Stuart installed over a kilometre of drip irrigation networks to counter the intensely dry spells the area is prone to. He then studied for a UK horticultural certificate online, luckily before Brexit so the qualification transferred to France. The certification tests were in French, of course, which was no obstacle as Stuart is fluent.

In 2020, it became obvious he would need to set up as a proper farmer. “That’s when it became really serious,” Stuart says, “As the hobby turned into a serious business, there was all this equipment and machinery. I knew I’d better get registered because as you grow people begin asking questions.”

Brexit also propelled his big push to get all the UK varieties of trees before the deadline, as there were no guarantees of getting any trees from the UK to Europe afterwards, adding another layer of difficulty to the notoriously complicated French bureaucracy.

The local authorities were not familiar with cider producing. As the saying goes, ‘If you want the apples, you’ve got to shake the trees’. “It was a nightmare. Even with French customs. They didn’t know what to do with me. It’s all about ducks here. If you have ducks and produce foie gras, that’s all good. But with me, they didn’t know. Not only were they unfamiliar with what the rules were, they didn’t know if there was any financial aid for me. Normally, if you set up as a farmer in France, you are entitled to some help. So, I had to get in touch with the Chambres d’agriculture de Normandie, which is a traditional cider producing area, to get them to explain to the Chambre d’agriculture in my area in Gers what to do and how to deal with my case.”

The same applied to customs, as the regional bodies are used to dealing with wine, but not so much with beer and, to an even lesser extent, with cider. So once again Stuart had to resort to Normandy as a liaison with local customs, which ended up in a form of unstudied designation as a farmer-who-grows-fruit-with-pips-in-it-and-is-allowed-to-turn-this-produce-into-alcohol. “All this back and forth was quite nerve-racking as I watched my overheads go up, but I’ve been quite fortunate because I haven’t had to borrow money. I financed everything through my work. When things go from a hobby to an official registered business, making the jump can be quite stressful. But saying that, I think Brexit actually gave me a bit of a boost because it gave me a deadline.”

Another fortuitous effect of Brexit was a burgeoning demand. Stuart wasn’t the only one missing his British cider. Lots of other Brits in France had been getting their supply from the UK, which would become increasingly difficult. “I thought, hold on a second, lots of people are in the same boat, so why not get it in France? And that’s why most of my styles are based on English ciders.” Being in Europe means that PHC can export within the continent as well, to more thirsty potential customers residing in other EU countries, pining for a taste of home. So what first appeared as a huge obstacle actually gave Stuart a boost and legitimised his business plan.

With an eye on the long-term, Pointy Head puts a premium on cycling everything. It keeps the bees that pollinate the trees and produce the honey used to make honey cider, which has a bit more sugar and flavour.

While not fully certified yet as ‘bio’ (as a small producer the cost of certification would have to be passed on to the customer), production is indeed organic. “I was going to add a little note to my labels to call it ‘quasi-bio’,” says Stuart. “I’m quirky, and a little nuts, and I want to keep it quirky. But cycling is a serious passion of mine. For the beer, I grow my own hops, and I malt my own barley. As you get older, you appreciate nature more, the whole aim is to keep it like a cycle, to throw something back at nature in a sustainable way. The older generations were very smart, and we’ve gone wrong by industrialising a lot of things. I want to keep producing in as traditional a way as I possibly can.”

Keeping tradition alive may also include plans to revive the production of ‘champagne cider’, which was known as Pomagne, said to be much gentler on your head after a bit of celebration. And by the sounds of things, Stuart, his family and the Pointy Head team will have milestones to celebrate for many years to come.

Dreaming of starting your own business or moving to France?

Properties for sale in Gers