Running a B&B and Indian restaurant in Mayenne 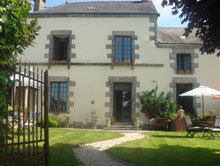 In 2005, having worked in our respective careers for several years, we decided that the moment had come to make an investment overseas. A nice holiday home was on the cards, and why not rent it out before we retire to get a bit of extra income while working?

Duly convinced, we began by spending a week in Vendee being shown around a series of nice houses, but then one of the estate agents hit us with a wild-card. “I’ve got a crêperie up for sale and it falls in your budget. Do you fancy having a look at it?” After deliberating we thought, “well, we have nothing to lose, why not?”

This however got us thinking that we could actually make a living full-time in France. We both had good jobs which we enjoyed, but nagging at the back of our minds was the thought that a change in lifestyle would be beneficial and coincidentally this opportunity presented itself out of the blue. 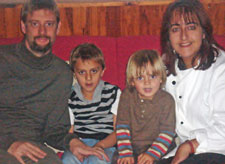 At that stage we had a 2 year old with another baby on the way, and we were concerned that we weren’t spending enough time together as a family. If we took on a business, we could be in the same place of work. We also wanted our sons to have a good education as they neared school age.

The crêperie was not quite what we were looking for but we then spent the next couple of years looking at hotels and restaurants all over France, including the Dordogne, Midi-Pyrénées and Aquitaine. We finally happened upon Le Chateau, an old manoir in a small village up in the hills of Mayenne.

We liked Mayenne because it is relatively unknown, even by the French. The countryside is pretty, the climate is not as hot as down south plus it is close enough to get to the ferry ports if we fancy a trip to see the family in the UK.

In 2007 we bought the place and began the refurbishments whilst still working full time. This meant all our holidays and several weekends over the following six months found us furiously building, painting, wiring etc.

In April 2008 we finally took the plunge. We handed in our notice to our employers and we were off. 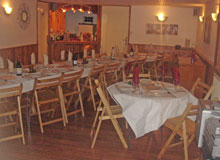 For the next ten weeks we worked like crazy and we were still adding finishing touches at 11pm the night before opening.

The first season was extraordinarily successful, considering how many people were booking with us despite having no pictures to look at on our website. Every time we finished a room, we took a photo and uploaded it. A mosaic of our property began to fall into place, allowing potential customers to see our vision and the enquiries began to flood in. Plus Yasmeen now had the opportunity to develop her favourite pastime, cooking. We were offering on-site meals to our guests in our restaurant, which consisted of barbecues, crêpe nights and classic French meals.

It was intensely gratifying to see the families enjoying themselves on holiday, and the feedback was really encouraging. 2009 was even more busy, as we moved into chambres d’hôtes and weekend breaks out of season. 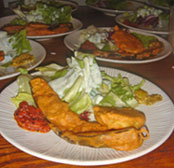 Due to the popularity of the restaurant with our holiday guests it struck us that there was limited choice in the area for specialist cuisines out of season and so from this winter we decided to open the doors to non-residents, capitalising on Yasmeen’s Asian heritage and flair, by offering a table d’hôtes Indian night. All of our spices and ingredients are sourced from specialist Asian suppliers as we felt it wasn’t right to simply cook meat in pre-bought jar sauces.

In offering 5 courses for a set price, we can offer a truly authentic Indian restaurant experience including Indian music, traditional Bombay mix and Cobra beers!

Since opening, the restaurant has been really busy, and to our great pleasure we are getting both French and British customers; we were worried that our food would be too spicy for the French palate, yet some of the highest compliments have come from our French clientèle. By offering a choice of mild and spicier dishes, there is really something for novices and curry addicts alike.

Now we adore our life here. Our two boys love school, and the community spirit of our village is something we had never experienced in the UK. Jonathan has joined the school association raising money to send the school children on skiing and other trips, which is a great way to get involved in local affairs.

We have no regrets about our move to France, and it has lived up to our expectations. Despite the financial gloom the business is fine and now we are asking “what next?”

By Yasmeen and Jonathan Moore