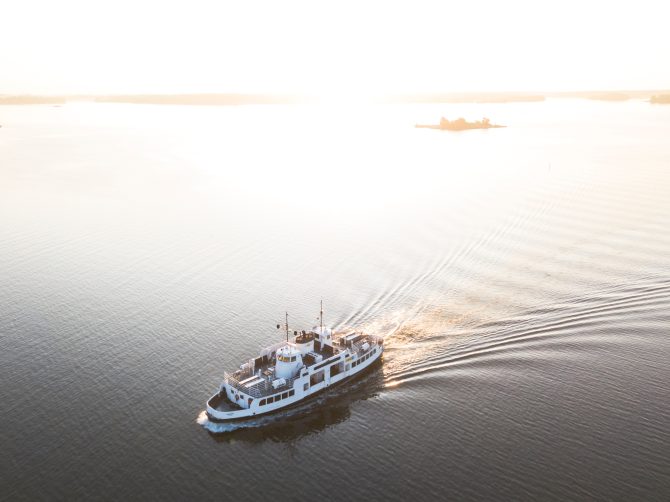 P&O Ferries suspends all cross-channel services after their shock announcement, Macron unveils his plans for tax cuts if he is re-elected, and the EU Commission urges border guards to stop stamping passports of French residents. Here are the French news stories you need to know about this week.

News of P&O ferries’ shocking redundancies made the headlines last Thursday, with 800 UK-based employees being told via a video link that their employment was being terminated, effective immediately. Since the announcement, the ferry company has suspended all its cross-channel services, including its popular Dover/Calais route.

This news comes after a period of difficulty for the company, which last year put a halt to their international cruises and have insisted that this most recent decision was the only way for the company to survive. However, news of P&O’s plans for rehiring staff and crew through international agencies in order to cut costs (see the BBC article here), as well as the company’s dispassionate handling of the redundancy announcements, has disappointed many, leading to protests being staged outside the P&O headquarters and many passengers declaring a future boycott of P&O services.

For the moment, passengers with tickets for Dover/Calais ferries are being told to arrive at the port as planned and make their way to the DFDS check-in booths—arrangements will be made for the next available ferry.

Since announcing his bid for re-election, French president Emmanuel Macron has announced further plans to reduce taxes in France. The proposed reductions would total up to €15 billion a year and include the abolition of the contribution à l’audiovisuel public (CAP) or TV licence, which currently costs €138 annually per household, and the CVAE business tax on large businesses.

In addition to this, he has promised to increase inheritance tax allowances by a proposed 50%, which would increase the allowance from €100,000 to €150,000 per parent per child. This would mean that a couple with two children could pass on up to €600,000 in assets free from inheritance tax. Changes to inheritance tax payable by other family members, such as grandchildren, nieces/nephews, and stepchildren, have also been proposed.

If you’re a French resident in receipt of a Carte de Sejour (residency card) under the Withdrawal Agreement, you are not subject to the 90/180-day rule when you travel to France and should not have your passport stamped when entering or leaving France. However, we’ve heard mixed reports of French residents having their passport stamped, even upon presentation of their residency card.

In response to the many questions and complaints they have received regarding this, the EU Commission this week issued official guidelines to border guards not to stamp the passports of British nationals resident in the EU under the Withdrawal Agreement. However, they also reassured Brits not to worry if their passport was stamped, as it would not affect their residency rights or incur fines. You can read the official guidelines here.

If you are a French resident travelling between France and the UK, we recommend being proactive with handing over your Carte de Sejour along with your passport at border control and clearing stating that you are a resident in order to avoid any confusion.

A special mention to one of our former FrenchEntrée advertisers who are doing their bit to help the Ukrainian refugee crisis. Luxury international hotel and resort chain Karma Group have recently transformed their hotel in Normandy into a refuge for Ukrainians who have fled their country after the Russian invasion. You can find out more about the project here and donate via their Just Giving page here.

Don’t forget to sign up for our FrenchEntrée webinar (click here to register), which will take place next week on Thursday 31st March at 10am GMT. I’ll be joined by an expert panel including FrenchEntrée Property Consultant Fiona Watton, Currency Exchange Specialist Mar Bonin-Palmer from Moneycorp, and International Legal and Tax Advisor Dan Harris from Stone King.

They will be offering their top tips and advice for Buying in France in 2022, and answering all your frequently asked questions on buying French property and moving to France. If you have a question or subject that you’d love for our experts to address in this webinar, why not let us know in advance? You can send your questions to us at [email protected]

Previous Article French Renovation Help Is at Hand
Next Article Get Ready to Go to France!