Too much romance in Paris 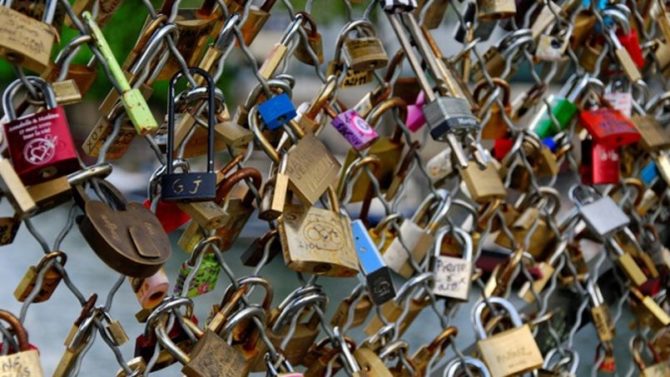 Commitment is not always a ball and chain; in Paris it’s a padlock. On the Pont des Arts, thousands of romantic couples lock their promise to the railings of the bridge creating a dilemma for the authorities.

Couples in love have taken this relatively new tradition to heart. They write their names on a padlock, lock it securely to the bridge and then throw the key into the Seine river below. The setting is wonderful, the backdrop of the river and the Parisian skyline couldn’t lend a more romantic frame to the prospect of everlasting love.

On a practical level, however, the accumulation of all these metal objects creates a safety hazard. Le Figaro reported this week that the authorities are considering measures to curb the practice. There is more than one concern. First it’s the weight of the padlocks that weakens the barriers that could pose a hazard should the sides come apart when a boat is sailing under the bridge or as a pedestrian is walking across. The second concern, more surreal, is that there have been repeated cases of theft of entire panels. Apparently the opportunist crooks are selling them for the value of the metal. The missing barriers are immediately replaced by temporary wood panels as soon as the theft is spotted, and new grills are installed shortly thereafter at considerable expense to the commune.

So the challenge is to ensure the safety of the bridge without banning the practice completely, as Paris prides itself to be the world’s most romantic city and no city official wouldn’t want to risk being perceived as the grinch who stole romance. Perhaps they should encourage the imitation of the tradition in Fatehpur Sikri in India, where believers make a wish by tying a string or a ribbon to the marble lattice of Salim Chishti.

Les amoreux, could you use a length of string instead of a metal padlock? There. Problem solved, Paris!