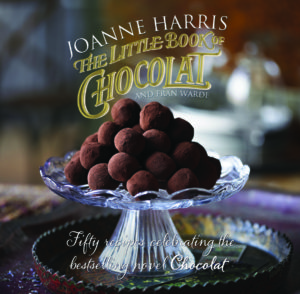 Fifteen years ago, the publication of Harris’s best-selling Chocolat united chocoholics everywhere in appreciation of its mouth-watering descriptions of Vianne Rocher’s decadent chocolaterie creations. Two sequels and one Oscar-nominated film later (starring the equally delectable Johnny Depp and Juliette Binoche) Harris has teamed up with food writer and chef Fran Warde to create the ultimate homage to chocolate, guaranteed to satisfy the cocoa cravings of even the most insatiable chocoholic.

Nostalgic, soft-focus photography deliciously complements an exquisite selection of fifty recipes showcasing a lavish range of chocolatey possibility. Whether bitter and dark, swirled with cream and juicy red fruits, or even perked up by a shock of chilli, there’s a scrumptious chocolate hit for all just waiting to be savoured. Matched with Harris’s gorgeous prose, telling quaint anecdotes and folklore on what she calls this ‘ancient, mysterious substance’, this is an indulgent feast for the senses. Like a secret diary filled with guilty chocolate pleasures, it even reveals the exclusive recipe for Vianne’s hot chocolate… ★★★★★