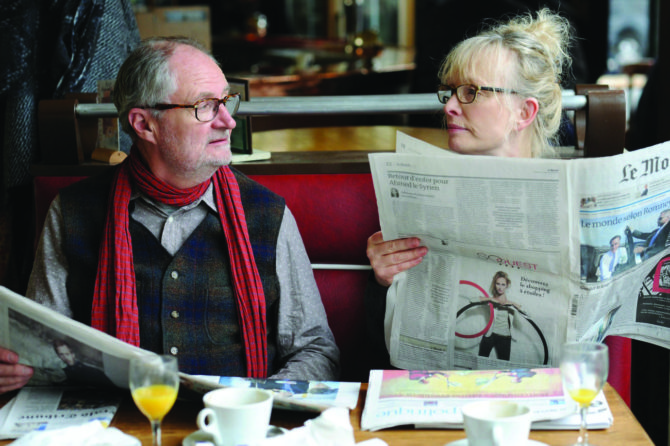 When Meg (Duncan) and Nick (Broadbent) Burrows return to Paris to celebrate their 30th anniversary, you can be sure that some things will have changed since they honeymooned in this most romantic of cities. In fact, the first thing they notice is the state of the hotel where they stayed… it’s gone a bit downhill, which makes Meg unhappy. But otherwise, Paris is on top form and the now far-from-newlyweds have gone the distance – still together decades along, if only in slightly better shape than their old hotel, where Meg now refuses to stay. This is the first of many signs that Nick has got his work cut out.

From here on in, husband and wife flit back and forth between ‘happily married couple’ and ‘couple on the brink of divorce’ – Meg’s moodswings are almost as exhausting to watch as they are for Nick to experience firsthand. With their children grown up and retirement looming large, the prospect of spending more ‘quality’ time together only serves to make Meg anxious, and yet the pair still share precious moments of blissful happiness, laughing and acting as if they’re in the first flush of love… so how could Meg’s insistence on the sumptuous surroundings of a top hotel ever fail to make things feel better?

This is far from being as sentimental as you may expect, given the man who directed Notting Hill, and takes a more ‘realistic’ look at long-term love. Duncan and Broadbent play their parts to perfection, and even Jeff Goldblum – playing an old friend of Nick’s – pops up during the proceedings. So what’s not to like about this weekend in Paris?