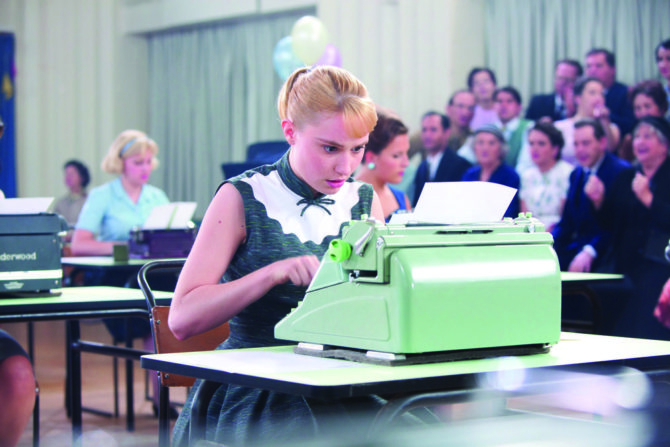 If you are looking for a light-hearted piece of film fluff then look no further than this charming romantic comedy from Régis Roinsard. Although you shouldn’t be too hard pressed to guess how the plot develops, the film offers a refreshing take on the more predictable boy-meets-girl romcom genre.

Set in 1958, frequently reminiscent of the retro styling of Mad Men, the film centres on Rose Pamphyle, a small town girl done good. She travels to Lisieux, Normandy and applies for a job with insurance man, Louis Echard, played by the somewhat easy on the eyes Romain Duris. A rather disastrous interview ensues although her saving grace is her ability as a typist. Rose is loveable but ultimately quite useless in her new secretarial role. In the end her employer offers up an ultimatum: either compete in a speed typing competition or lose the job. Louis takes on the role of trainer and devises a rigorous regime, setting his sights on her becoming a champion.

There is a sense of repetition as the speed-typing competitions progress but the visual elements of the film should keep your interest sparked. Filmed with an almost Technicolor quality, credit is also due to the wardrobe designers as the sartorial choices hold great visual appeal.

Another setting for this film would have resulted in an overly saccharine product but what could be a more perfect location than France for this quaint but rather touching storyline? The film’s final adage of “America for business, France for love” certainly rings true. ★★★★

Previous Article The French baguette: all you ‘knead’ to know
Next Article Top-notch beef: food specialities of Mayenne