What Does the French Expression “A Flower in Your Rifle” Mean? 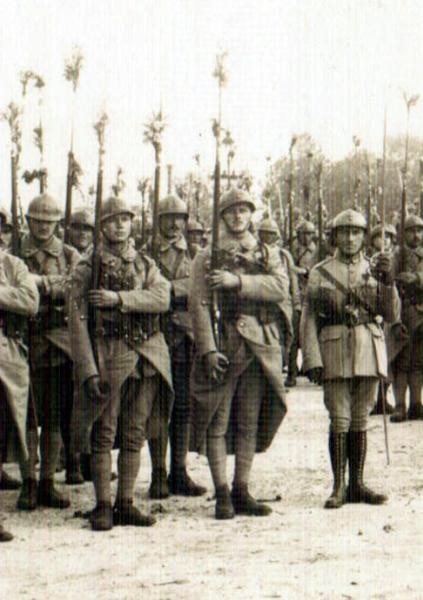 You may hear it when talking about the attitude of a young person blithely launching themselves into a new situation – such as marrying too soon, or entering the workforce as a new recruit in a difficult career – in the sense of describing a mix of innocent enthusiasm, more than a little naïveté and a sense of foreboding that the path ahead is much harder than it appears. The more experienced French person may say “… et oui, il parts la fleur au fusil” [lit. he leaves with a flower in his gunbarrel]. What does this mean? And where did the expression come from?

In 1914, the assassination of Archduke Franz Ferdinand of Austria in Sarajevo would set off a war machine that would prove impossible to stop, but everyday life in European towns and villages continued pretty much unaffected. The book by GALTIER-BOISSIERE Jean, La fleur au fusil, Editions Baudinière, Paris, 1928, about the beginning of the First World War, illustrates the transition between the pre-war months full of brave insouciance facing what people thought would be a brief and determining conflict, and the sudden brutal realization after the first engagment that this was in fact a relentless industrial massacre on a scale never seen before in their own soil.

In the months before the war actually started, preparations rolled out in a climate of reassuring propaganda while the enemy was a distant and abstract concept. Young soldiers left their families with the faintest quiver in their smiling lips, and many mothers and girlfriends, holding back proud tears, would insert a flower in the gunbarrel, as the soldiers said their goodbye’s to join the long march.

From then on, the expression partir la fleur au fusil stands for that impending loss of innocence, the blissful ignorance of what lies ahead combined with a purity to do what’s right in a man’s heart. In reverse it has also been used in a conflict as a symbol of reconciliation, to remind boths sides that there are human lives at stake, or to make a stance for peace, as used by the flower power movement in the 60s.

[Yes, I know. Today, a flower on the rifle, the French national anthem, the Watch on the Rhine, yes. But tomorrow… this man there, that left singing, he will be nothing but a pitiful guy… face to face with war!]

Are you interested in the history of WWI? Discover our special centenary publication with 180 pages of stunning images and riveting historical detail: