Taste of the terroir: The Île d’Oléron 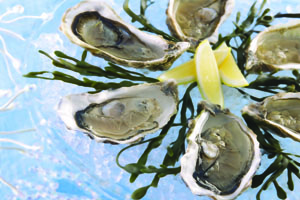 The Île d’Oléron, off the west coast of the Charente-Maritime region, boasts a lengthy tradition of gastronomy. Daily markets take place all over the island, from the towns of Saint-Denis and Saint-Georges to La Bréeles-Bains and Dolus, showcasing over 90 species of locally caught seafood, landed at the picturesque port of La Cotinière, Charente-Maritime’s main ﬁshing harbour. Up to 300 ﬁshermen work La Cotinière, with around 100 boats unloading their catch, which are snapped up by traders from the island and beyond.

This area abounds in bass, langoustes and sole plus rope-grown mussels and its crowning glory: uniquely farmed ﬂat and cupped oysters. Marennes-Oléron produces the only oysters to have been awarded the prestigious Label Rouge, a French mark of superior quality. Their renowned taste is partly down to a unique production process. Over the four years it takes for the oysters to mature, they’re ﬁrst grown in the sea then relocated to breeding parks and spend their last threeto-four months in marshes where fresh and sea water blend to reﬁne their ﬂavour. Oléron oysters are equally famous for their distinctive colour, due to the presence of microscopic blue seaweed which infuses their ﬂesh with a green hue. Although they’re generally eaten from the shell, a local recipe advocates oven-baking them in a rich fondue of leeks, white wine, shallots, butter and cream – it’s an indulgent, warming way of enjoying them in the colder months.

CHARENTE SPECIALITIES
Other coastal delights include top-class mussels, grown on offshore ropes tied to pilings. A traditional method of preparing them is by using an églade, where the mussel shells are arranged vertically onto a wooden board and covered in a thick layer of pine needles which are then set alight until they burn out. The mussels are cooked in their closed shells, retaining their juices to produce a richer depth of ﬂavour. Locals complement the shellﬁsh with some fresh rustic bread and a chilled glass of crisp white wine. The only dessert worthy of rounding off an Île d’Oléron seafood supper is the traditional Galette Charentaise. This delightful dessert’s glazed, ﬂaky pastry has been providing the Charente-Maritime region with its sugar ﬁx for generations.

LIQUID GOLD
Northern Oléron boasts 1,730 acres of vineyard, which has thrived here since the third century, thanks to the island’s mild conditions and ample sunshine. A dozen wineries on the island produce the region’s oldest traditional product, as well as the famous apéritif called Pineau des Charentes, cognac and a variety of liqueurs. In SaintGeorges d’Oléron, one wine cooperative dates to the end of the 19th century. La Bière des Naufrageurs, a traditional brewery situated between Saint-Gilles and Chéray, has been producing preservative and colouring-free lagers, ales, stouts and ﬂavoured beers since 1995. Using a similar fermentation process to the high quality brewers of Belgium and northern France, its bières won two gold medals at the national beer contests of 2000 and 2006.

Previous Article Dijon Mustard
Next Article What Does the French Expression “A Flower in Your Rifle” Mean?