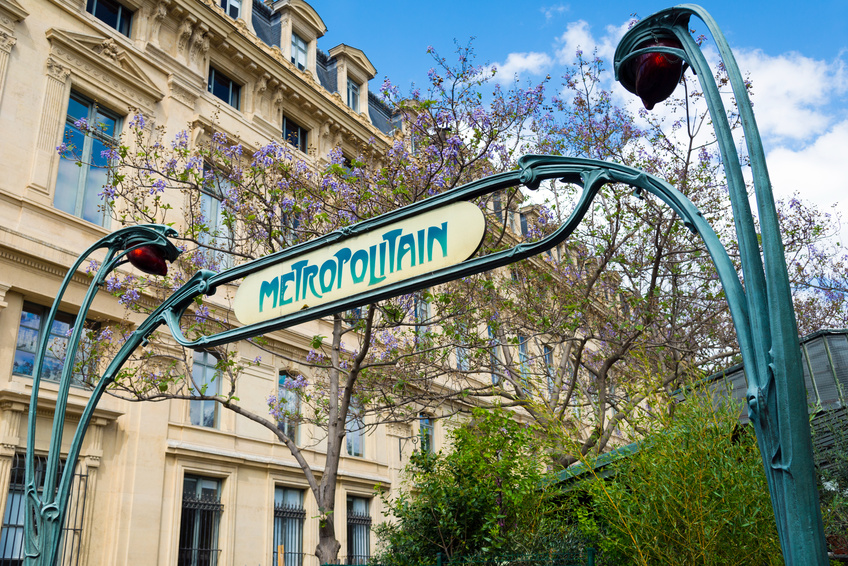 My first visit to Paris was a remarkable experience, which I will never forget. I booked the Dover-Calais ferry and drove with my wife from London in the cold Christmas weather. We intended to stay until the New Year in a hotel located in a suburb of Paris and visit the city every day.

It was a great feeling to arrive in Paris and see the city of light ­– a modern city with a very deep sense of history. I will never forget when I first drove through, passing the canals and seeing the monuments. It was like a huge open-air museum. It was love at first sight.

It was dark in the evening, Christmas lights illuminating the whole city. It was bright, almost like daytime. The streets were very busy, full of shoppers marching from one shop to another. I was fascinated seeing The Palais Garnier, which is the Paris Opera House. I parked my car in a small one way street nearby. When we reached the main road, there was an underground station with a big, lit-up sign displaying the word ‘Métropolitain’. I did not make note of the road name, as I thought that the name of the station would be sufficient for finding my car again. We visited the Opera house and walked towards Place de la Concorde. We then walked back to find our car. I located what looked like exactly the same ‘Métropolitain’ sign that I had noted in my head, but it was not the right street.

I became anxious and confused. I approached people who were passing by. Some just ignored me. I told a French man in English that we were looking for ‘Métropolitain’ station. He pointed towards the station. I asked an American couple who were tourists. The guy said, ‘why don’t you go inside the station and find out?’ I approached the woman behind the counter and asked her the same question. She said, “c’ est Métropolitain”. I repeated, “but this is not the same.” She laughed, “Tous sont métros de Paris, ils sont tous le Métropolitain.” She continued in broken English, “All … Métropolitain.”

I finally realised my mistake and understood that the ‘Métropolitain’ sign was the symbol for all metro stations in Paris, not the name of one station! This was just the beginning of our nightmare. How were we going to find the car? It took us nearly over two hours walking through many streets that all looked the same. I wondered whether to call the police. It was a miracle that I finally managed to find my car.

It was late in the evening and we were hungry. We decided to eat in a recommended Lebanese restaurant in a street very close to the Champs-Élysées. We parked close by, so that I could watch my car easily. Every now and then I looked through the window. Suddenly I saw a car at the top of the road shaking back and forth. It was stationary, but was moving up and down. After a minute or so, I saw the car in the front come out and leave. The waiter saw my astonishment and said, ”The cars in Paris are parked bumper to bumper – it’s difficult to park, and impossible to leave.”

We were staying in Épinay-sur-Seine in the north of Paris, 11.3 km from the city centre. The next morning, we walked around the small town. It was Christmas and all the shops were closed. We were happy with our hotel, but we decided to check the prices of other local hotels. I saw a very nice building marked ‘Hotel de Ville’. I approached the building, but the door was closed. After a few minutes a man opened a window. I asked him, “how much is it per night?”. He replied, ”Qu’est-ce que vous voulez?” I repeated my question. He simply said, ”Il est fermé”. I could not understand him. I asked him again, “I just want to know the prices”. He shouted, ”Il est Noël. Le bureau est fermé” and closed the window. We wondered what kind of hotel this was and left.

When we were in the centre of Paris, I saw another Hotel de Ville. It was a magnificent large building that looked like a palace. I suggested to my wife that it was possibly a five-star branch of the same hotel. It was only when I visited the tourist office to get directions to various sightseeing places that I found out the Hotel de Ville is actually the city’s municipal office!

We stayed in Paris for ten days and had a fantastic time. I loved everything about this romantic city and vowed to never hesitate to come back to experience it again and again. But I promised myself that I would learn the language!