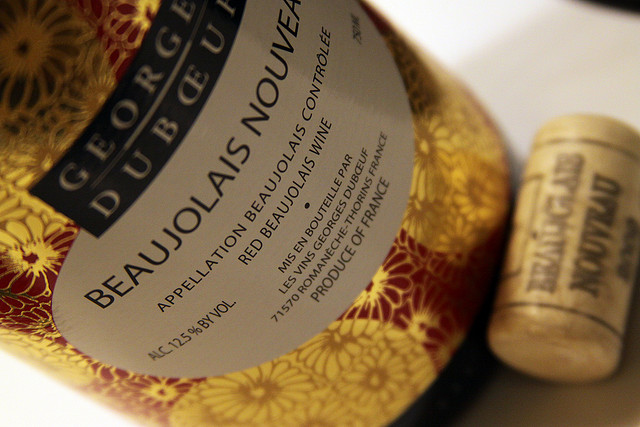 The third Thursday of November can only mean one thing in France: Beaujolais Nouveau! Every year at this time the vin primeur is released to the market. Just mere weeks ago this wine was still hanging on the vine in grape form, as the term primeur refers to a wine that is sold in the same year as it has been harvested.

The Beaujolais Nouveau is characteristically light, fresh and fruity, and inexpensive. You’re not expected to take it too seriously, which makes it a particularly friendly wine. Buy a few bottles from different vignobles, set out some cochonailles on a board (cured hams, rosette de Lyon, etc) a sliced baguette and voilá! …you have a party. For something more elaborate you can prepare a Burgundy-inspired menu following the gastronomic tenet that what grows together goes together, for example oeufs en meurette or coq au vin, and you could include some Époisses on the cheese platter.

Beaujolais is a French Appellation d’Origine Contrôlée (AOC), belonging to the Burgundy wine region. Its production is located north of Lyon, joining the southern tip of Burgundy and the northern Rhône-Alpes. It’s a red varietal wine which means that it is made out of one kind of grape (Garnay). It is a new wine, bottled just over two months after the harvest so it is low in tannin and fruity. There are different opinions as to how long you should keep it but the rule of thumb seems to be six months. Best served “frais” at 11-13 degrees.
[mrb]

Wherever you are in France you can’t escape the Beaujolais Nouveau promotions in wine merchants and supermarkets, and if you start a conversation you are likely to get an invite to one of the myriad tastings happening throughout the weekend or –even better– to share it with friends and neighbours in the warm conviviality of your host’s home. The mood even reaches out worldwide, take a look at the Beaujolais run, that started as a challenge among friends in the 70’s, to see who could be the first to bring a case of Beaujolais to London, and evolved into a huge charity rally that start at a designated point in the UK and ends in deepest Burgundy, passing through beautiful towns and vineyards, and attracts an impressive array of teams piloting supercars, classic cars, 4x4s, kit cars, specialist cars, daily drives and touring motorcycles.

…find out more about French wines.
Would you like to receive “La Semaine” our free weekly Francophile fix by the editor of FrenchEntrée magazine?  Sign up here!