Restoring a Water Mill in the Lot 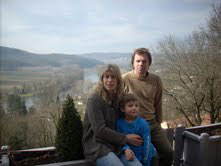 In 1991 Giles and Fi Stonor bought an old mill “Moulin de Latreille” initially as a holiday home. Situated on the banks of the Ouysse, known to the locals as the Emerald River for its sparkling clarity, Moulin de Latreille is a beautiful property in the heart of the Lot. Being positioned on a protected valley 2km from the nearest village, the old mill is not connected to the mains electricity or water. In 1999 Giles and Fi decided to give up the smoky city life of London, where Giles worked as a decorator and Fi as a PA, and move to the green pastures of the Lot permanently. For many years Giles and Fi made do using a generator to produce their electricity but in 2002 decided to apply for a grant to install a water turbine.

In 2002 they applied to the FDE (http://www.fde.fr) for an eco-grant to cover the majority of the work. A representative came out to assess whether the water turbine would be feasible and months and months of paperwork followed. In early 2004, a pregnant Fi was assured that the work would be completed before her baby was born. However, work was not started until November 2004, and was finally completed in spring 2005. Fi and Giles had to move out while the work was being done and their son Felix was born. Fi thinks that the chances of getting an eco-grant in France really depend upon personal circumstances and, in their case, it would have been more expensive and too risky for the government to attempt to install mainline electricity to the property. 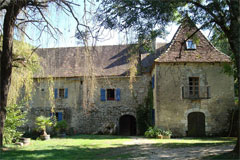 The amount of energy the water turbine generates is dependent upon the weather. In the winter when water levels are higher energy can be produced all day, but in the summer it sometimes only works for a couple of hours a day. Fi says you need to be home a lot with a water turbine in order to turn it on in the morning and off in the evening. When the water is low you can stop starting the turbine throughout the day by closing the gate for a few hours at a time in order for the water levels to rise. When the family go away they must turn their electricity off, including the fridge, so it is not as easy as being connected to mains electricity. There is also important maintenance which must be carried out on the turbine such as changing the belt, greasing the surface and removing algae and weeds from the grills – which can be a daily job.

Since the water turbine was installed Giles and Fi have opened a B&B and offer their guests a place to unwind in totally unspoilt countryside where kingfishers, nightingales, wild orchids, damsel flies, butterflies and herons abound. The family have restored the interior of the mill with a spirit of simplicity and comfort to create a meditative space sensitive to its historic past. The B&B has also got recognition on Alastair Sawday’s for being a unique and eco-friendly place to stay.

However, the water turbine generally does not generate quite enough electricity for the family in the summer when the B&B is booked up. Giles and Fi have therefore applied to the FDE again for a grant for solar photovoltaic panels. The family hope that, with 128 days of sun a year, these panels will boost the electricity supply and prevent them from having to use the generator at all.

Giles and Fi are enjoying running the B&B and their life in France. Giles still works as an interior and exterior decorator and has helped restore some fantastic manors and châteaux in South West France. Felix has settled well into the local primary school and has an excellent grasp of French. Their Lot lives are a great contrast to their London lives but the couple say they wouldn’t go back now.

Transform the way you power your home with EnergieX. Discover the world’s best renewable energy systems at preferential prices – helping you save on bills, add value to your property, reduce your carbon footprint and optimise return on your investment.