Sylvia Edwards-Davis talks to Ani Moriarty about experiencing a coup de foudre for a little cottage in Normandy, which became a transatlantic project

When Ani Moriarty set out after her dream, she couldn’t have known that her best-laid plans would crumble not once but twice, and turn her French property search into a decade-long quest. That is until a little cottage near the iconic Mont Saint-Michel caused ‘love at first sight’…

FrenchEntrée Magazine: What persuaded you to choose this property?

Ani Moriarty: My first attempt at buying in France was in the Dordogne with a colleague. That fell through. Then a ‘ruin with a view’ on the border of Brittany and Normandy was nixed as I couldn’t find an investor in time. After that, I met my future husband, Liam. A year later, I went to Paris on a work trip, and there was a message at the hotel reception from the man who’d originally taken me house-hunting. He said “Ani, I bought you a house,” to which I replied, “Yeah, right. I’ll see you in a few weeks, and you can show me”. So I went to the coast, walked in the door, and voilà! Love at first sight. As serendipity would have it, the cottage is located in Montanel, 15 minutes inland from the Mont Saint-Michel, and in the exact same tiny village where I’d stayed the year before! My husband and I were only a year into our relationship back then. I called Liam in the US and said, “Hey, guess what? I just bought a house in France!”

FE: Tell us about your cottage…

AM: The house is part of ‘le bourg’, in the downtown area of the village, across from the church. The original bourg was six single townhouses, each with a common wall between neighbours. Numbers 1 and 2 remain single units, owned by a British owner and a retired French carpenter. Numbers 3 and 4 have been joined together and are owned by a Parisian couple who visit infrequently, and we own number 5 and 6, blended into one unit. We named the cottage ‘Arc-en-Ciel’, the French for rainbow. It’s very spacious with chestnut plank floors, a lot of original mud plaster walls, and two chimneys – a remnant from when they were single units. Downstairs is an open living-dining room with a hearth, and the master bedroom is above it. To the other side are two steps up, into the kitchen, with its original beautiful oak cupboards made by our dear carpenter neighbour’s grandfather. Next to the kitchen is the scullery, which was the goat shed. We put in plumbing there and laid a cement floor, to make a bathroom. It was too big, so it’s been turned into two rooms – a scullery at one end and a master bathroom with a claw-foot tub at the other. The scullery opens into the westfacing garden, and the chestnut staircase in the kitchen goes up to the second bedroom. Our last big project was to cut through the wall in the master bedroom and build a room over the former goat shed. We call it the ‘West Wing’ and it’s a den with futons, an office and a roof window looking out to the setting sun. 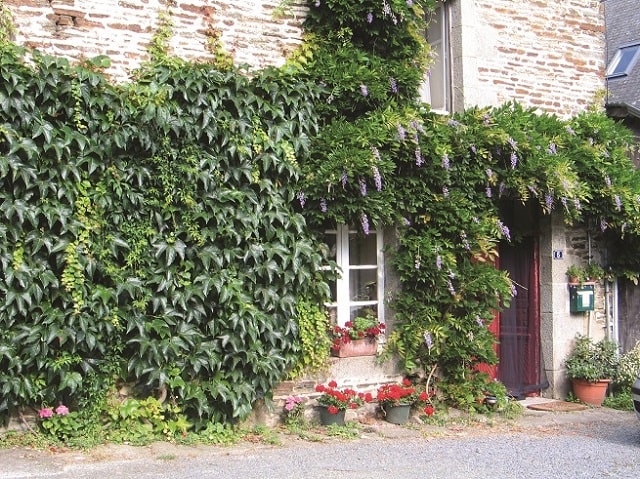 FE: How did you approach the renovation?

AM: We’d fly in from Seattle to tackle the next job, and each time we knew that we were opening up a can of worms. The project pretty much consumed our lives in France for ten years – happily! Our backs have taken a good beating. We went the DIY route, except that we hired French-licensed artisans to do the wiring, plumbing and new roof. Liam is methodical and thorough. He managed the hard stuff, like laying floors and barrelling through thick stone walls, and I came in behind, to do the clean-up and also the painting, plastering, etc. I did marvel at how people lived their dream through me back in the US. There I was, up to my teeth in mud and plaster, and their visions were of pure loveliness. They had no idea!

FE: What’s your favourite part of the house?

AM: It changes, depending on the season. In winter, after a day in the open living room with the wood fire burning, my favourite spot is the West Wing. It’s a place of respite at the end of the day, when you turn everything off. But overall my favourite is the kitchen, where I unwind and cook, and socialise with family and friends. It’s the centre of the home, and in summer it opens out onto the garden.

FE: Did you need financing?

AM: Of course! It would’ve been great to have an unlimited supply of cash, but even that requires careful budgeting. We found the funds we needed as we went along. We didn’t begin with a lump sum. We just got started. 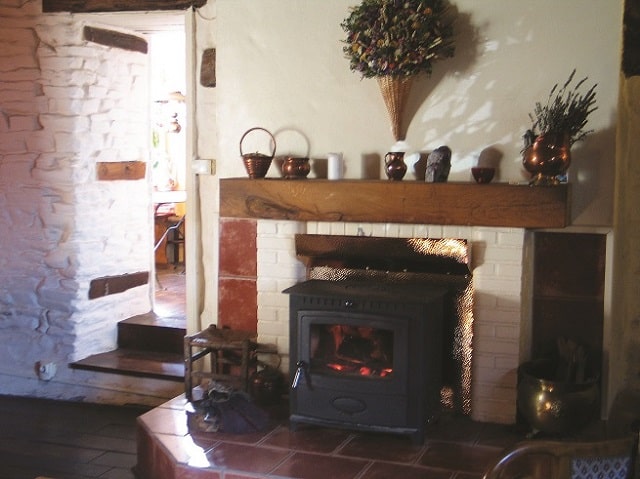 FE: What about the language?

AM: I didn’t speak any French but I’d neither the time nor the energy to be embarrassed. I quickly discovered that to converse in French, however poorly, was golden. The key is to be earnest, respectful and open. The French love conversation so while ‘total immersion’ had me nearly falling asleep at a few tables early on, it’s an extraordinary way to learn and make friends. As a result, we have many friends who invite us over for long afternoons around the table, to talk about everything from global affairs to next door’s dog.

FE: What would you say to someone considering a renovation project?

AM: I went into this with the rose-tinted lenses of any Francophile. It’s all about one’s attitude and approach. That’s the rudder steering your experience, either towards enjoying the renovation and the fruits of your labours or feeling like it’s drudgery that you never wanted in the first place.

So check your inner game to see what it is that you want to take on. Nothing will go perfectly as planned. Anticipate delays, higher costs, and more troubleshooting than you bargained for. You are in a foreign country. It’s not your language, not your ways, not your approach, not the materials you know. And it always costs more than you budgeted for. I observed a huge difference with how the British approach a renovation. Many haul materials and supplies for the cost savings and to have the familiar at hand. We didn’t have that option. For us, the more we knew France, the more French we wanted our home to remain – and it has. We let out the cottage and we find Europeans and French adore it. With Americans it’s a mixed bag, from ‘oh-my-God-this-is-gauche’ to ‘oh-my-God-this-is-idyllic’. Renovating in France, there’s history tucked in the walls, which gives insight into how the locals lived, the wars they endured and harsher times gone by. There’s a constant choice to respect those traces or get rid of them. Many old French houses were abandoned because of the time and energy it takes to renovate them.

FE: What were your biggest challenges?

AM: They included unfamiliarity with materials, the language, building code requirements and getting along with the Mayor – which includes not bypassing French laws about renovation. People get into tangles by ignoring or pushing against the local customs and rules – they generally lose.

FE: What was the most discouraging point?

AM: A chimney fire, early on. Apparently, it isn’t uncommon, given the age of the building. Standing in the rain while a roof fire threatened my most cherished investment gave me pause. It wasn’t the end but it could have been… 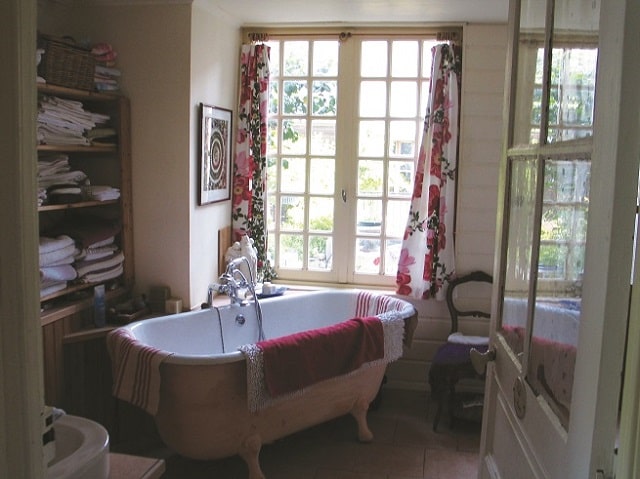 FE: What about paperwork and bureaucracy?

AM: The renovation process itself was easy. You need to get approval for façade changes with the Mayor. In the US everything needs a permit, so it was ridiculously straightforward. The purchase couldn’t have been easier. It was direct from owner, in front of a Notaire and a translator. It took about three hours. Receiving the deed involves a three-month wait. For the personal paperwork, like establishing residence and health insurance, I tried with all my might. I made progress but it can wear you right down. My husband is an EU citizen so it made things easier, but I will say that French bureaucracy is thick with constant detours one cannot begin to understand. If any advice could be given, it’d be to engage in this aspect with someone who’s fluent in French from the outset. Otherwise there are unnecessary delays, and even misunderstood charges, that can make your life absolutely miserable.

FE: Would you have done anything differently?

AM: I have no regrets. I know it sounds a little glib but, no, I wouldn’t have done it differently because it was an opportunity of a lifetime, which I seized and enjoyed completely.

FE: What’s your best-ever day at the cottage?

AM: I did have one very special day, when I was given the keys to the cottage. It was a skeleton key to the 200-year-old, hand-carved chestnut door. I opened the door and walked through the house silently. Then I came back out front, down the lane and into the gardento-be. The church bells were ringing, and there I was, standing on a stamp-sized plot of earth that was all mine – in France! It was the culmination of years of trying and letting go, and then of this house falling out of the sky and into my lap. I was in awe for days. In fact, to this very moment, my husband still can’t believe our luck. 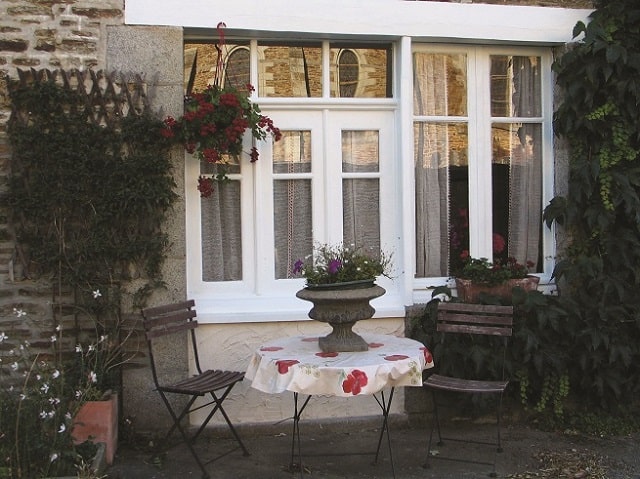 The array of French property to renovate is vast. Anything and everything can be found, in various states of disrepair. From the manoir that needs a paint job to the longère requiring a complete rewire, re-roof and all sanitation redone. It’s a case of paying your money and making your choice… The vendor pays for the statutory checks for the presence of lead, asbestos, insect infestation and wood rot, etc, that form the DTT (Dossier de Diagnostic Technique) pre-sale report. The DDT doesn’t cover structural issues but you can have your own report commissioned and make a favourable outcome conditional to your purchase. Other factors, such as rights of way, servitudes or special conditions, can also be checked at the Compromis de Vente stage. You must have a detailed understanding of exactly what you’re buying. Also, if you’re thinking of making major changes – eg an attic conversion, extension or pool – you can add the condition that planning permission is to be obtained by the vendor before the sale, which is common practice in France and saves you the headache of finding out that your plans aren’t possible after completing the purchase!

Got a real life story? Share it with us!

Previous Article Undaunted by Brexit
Next Article What Will Your Money Be worth after Brexit? We Asked an Expert