Beekeeping in the Charente – July 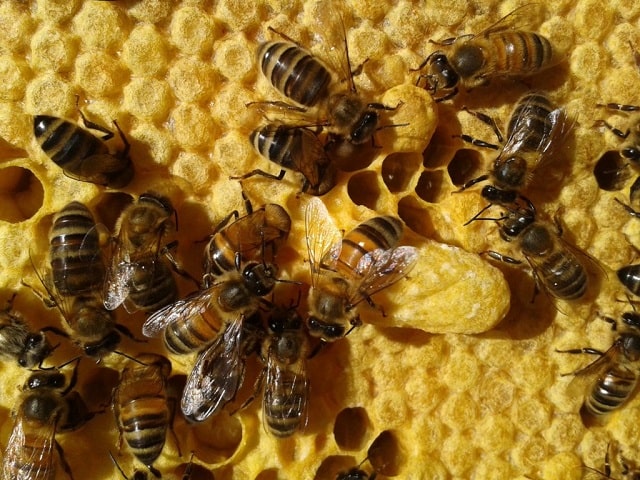 July is a busy month for bees and beekeepers alike; the nectar is flowing and honey supers are filling up faster than you can put a warm wheatie bag on your aching back

Beekeeping at this time of year is a very physical activity and ‘beekeeper’s back’ is not a myth. A full honey super can weigh up to 28kg and if you’re a bit on the petite side like me (all 1.52m of me) then hefting supers off to check the brood underneath can be hard work. It’s all worth it for a good honey harvest though! How do you know when to super up? If you inspect your colony during the day and more than six brood frames are covered in bees, that’s when you need to add a super. Don’t forget to put a queen excluder between the brood box and super box to keep the queen out – who wants baby bees in their honey?

Weekly hive inspections are still important as bees can swarm even this late into the year. The recent extremely hot weather followed by a few stormy days can trigger them into swarming behaviour, so extra vigilance when looking out for swarm cells is vital if you don’t want to lose your bees. I can’t stress how careful you need to be when checking your frames for queen cells; if you see queen cells on the sides or bottoms of the frames (and there will frequently be a few of them) then your bees are getting ready to swarm and you need to act according to your chosen method of swarm control. If you see one or two queen cells on the face of the frame then your bees have decided to replace their queen and these are supersedure cells, as shown in the attached photograph. A colony can make this decision if they decide their queen is beginning to fail, is old or weak, or has already died. It’s quite sad to see a queen going about her business while there’s a pretender to the throne in the making, but it is a sign that the colony is healthy and is in control of its future. It’s not uncommon to see two queens in a hive shortly after you’ve seen a supersedure cell; sometimes the old queen will live alongside her daughter for a little while.

Keeping an eye on varroa mite counts is also key to the colony’s success, although at this time of year it is difficult to treat for varroa with chemicals as the honey is then ruined. However, I would much rather save my colony than have honey for my own consumption (bees can eat ‘tainted’ honey so it can be left for them). Even encouraging the bees to groom by dusting them with icing sugar will affect the honey, which won’t technically be honey as it will contain icing sugar. Hopefully the varroa will have been managed by the beekeeper’s intervention earlier in the year, using any of the approved treatments such as thymol-based deterrents and oxalic acid sublimation in the winter. The threshold in July for mites is an average of 16 per day, so if your count reveals a number greater than this you need to take immediate action and forget about extracting any honey from that hive this year.

Clearly there is a need for a non-chemical treatment and we are now experimenting with the newly developed ‘Bee Gym’ invented by Stuart Roweth. This small plastic device is fitted with wires and ‘flippers’ and is sited on the floor of the brood box, and the idea is that as the bees clamber over and around it they are naturally groomed. The wires and flippers will dislodge any mites clinging to the bees’ bodies and fall down. We are hoping that this will assist the bees in their personal hygiene – watch this space for reports on how it’s working!

Good luck with your bees this month, and if there are any questions about anything bee-related please don’t hesitate to get in touch.

Amanda and Kevin moved to Confolens (16) in 2015, opening a chambre d’hôte and launching their beekeeping experience holiday business. They live with five cats, two tortoises and several thousand bees, and enjoy sharing their adventures in the apiary with others.

Guide to Buying a Vineyard in France

Farming at a Snail’s Pace

By Amanda and Kevin Baughen

After working in the UK charity sector for many years, Amanda and Kevin moved to Confolens (16) in 2015, opening a chambre d'hôte and launching their beekeeping experience holiday business. They live with five cats, two tortoises and several thousand bees, and enjoy sharing their adventures in the apiary with others. Contact details: Tel: +33(0)545 71 22 90 Email: [email protected]