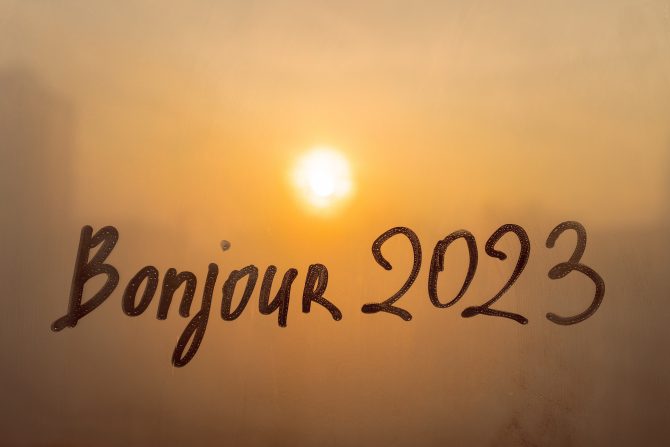 Rising prices, travel changes, new grants, and plenty of jours fériés await French homeowners and expats in 2023. As we move into the New Year, we take a look at 23 changes taking place in 2023.

Let’s get the bad news out of the way first: with inflation in France at its highest in decades and energy prices soaring around the world, 2023 is set to start with a series of price hikes. First up, the current 4% cap on energy tariffs is going up on January 1st, meaning a potential increase of up 15% on gas and electricity bills. In practice, this means that average household bills are likely to go by around €20 a month.

Petrol prices will be the next to increase, with the government’s current fuel rebate ending on December 31st. From January, expect to pay about €5 more to fill up your car than you did in December and an average €17.50 more than the price you paid back in November. Eek!

Thankfully, there is some respite for low-income workers who rely on their car for work – €100 fuel grants will be available from January to help counteract the bump in fuel prices. The full details haven’t been announced yet, so keep an eye on our weekly news digest.

France’s minimum wage or SMIC will go up another 1.8% on January first, putting the gross monthly wage at €1,709.28 or €1,353 net. Importantly, this figure is used as the basis for calculating the sufficient funds needed for a French visa, so expect the required minimum to go up accordingly.

If rising petrol prices inspire you to take the train instead, unfortunately, fees are also going up on some SNCF train fares from January 2023 – expect an increase of around 5%.

One more transport-related price rise – French motorway tolls are also set to go up from February 1st, 2023, with an average 4.75% increase.

The official figures haven’t yet been announced, but word has it that interest rates on the popular Livret A tax-free savings account are going up again, this time to an expected 3%.

President Emmanuel Macron has been pushing his pension reforms since the start of his presidency, and January 10thmarks the date when his long-awaited plan will be unveiled – expect protests and strikes from unions and the opposition to swiftly follow

France’s move to improve sexual health services has already seen some changes implemented in 2022 – notably, free contraception extended to women up to the age of 26 and universal free access to the contraceptive. From January 1st, 2023, condoms will also be available free and without a prescription for all 18 to 25-year-olds from the pharmacy.

10. The EU’s EES (Entry and Exit System) comes into play

The EU’s automated passport scanning system, known as the Entry and Exit System (EES), is finally – after several delays – coming into action in May 2023. Find out more here.

Hot on the heels of the EES, the ETIAS or EU Travel Information & Authorisation System is the new online visa application service that is being brought in for all non-EU residents travelling to France. It’s set to come into operation in November 2023, and you can read more about the proposed changes here.

There’s good news for homeowners and renters living in France: from 2023, the Taxe d’Habitation, the second of France’s two property taxes, will no longer be payable on any primary residences. The tax has been phased out in recent years, with only the highest earners still paying in 2022.

However, second-home owners are still liable to pay Taxe d’Habitation on their secondary residence(s), and the 2023 Budget announced the possibility of increasing these taxes on vacant and secondary properties.

If you’re travelling between Ireland and France from summer 2023, look out for the new combo ticket that allows you access to ferries and trains in both countries – part of a combined effort by France and Ireland to encourage more sustainable travel methods.

This one has been on and off again as many times as we can count, so don’t take our word for it! But the latest news is that the hotly contested control technique for motorbikes over 125cc is set to be introduced from June 2023.

You might have already noticed your local supermarket asking if you want a receipt or not, and more and more shops are offering the option for an emailed receipt. From April, this more eco-friendly practice will become standard practice at all shops – if you still want a printed receipt, you will need to specifically request one.

Good news for French residents looking to renovate their properties – the MaPrimeRenov scheme, which offers grants for property renovations that increase energy efficiency, will be extended into 2023. Even better, the €2 billion budget has now been increased to €2.5 billion.

The Crit’Air sticker system currently in place in many low-emission zones around France is set to get even stricter from July 2023, when Crit’Air 3 vehicles will be banned completely from entering the capital.

On the subject of the Crit’Air sticker, another 43 cities with over 150,000 residents are set to introduce low-emission zones from 2023 to 2025. This means that all cars must display a Crit’Air sticker, and restrictions apply for higher polluting vehicles.

France’s efforts to reduce waste include a new grant available for repairs to various household appliances, including drills, coffee machines, washing machines, vacuum cleaners, and more. The grants could save you up to 20% (in addition to the money you save by not needing to replace the item), and best of all, there’s no paperwork – all you need to do is use a ‘QualiRépar’ certified professional.

Good news if you hate being bothered by cold callers (especially tricky for those still working on their French!) – new regulations from March 2023 mean that commercial phone calls can no longer be made on weekends, evenings after 8pm, or lunchtime (from 1pm-2pm).

If you’ve been thinking of using France’s increasingly popular car-sharing services – which include Blablacar, UberXShare, and Mobicoop – 2023 is the year to do so! The government are offering a €100 incentive to new users that sign up to one of the apps – part of the sum is offered just for signing up, with the rest ‘earnt’ as you complete your car-sharing journeys.

23. A good year for jours fériés

Just two of France’s 11 jours fériés fall on weekends this year, with two providing the option to ‘faire le pont’ (enjoy a four-day weekend) and four bank holidays falling in the month of May. See our 2023 French jours fériés calendar for all the dates.

Previous Article What Planning Zones Can I Build in? Ask the Experts
Next Article News Digest: France Brings Back Covid-19 Tests for Travel