Driving in France – an Introduction 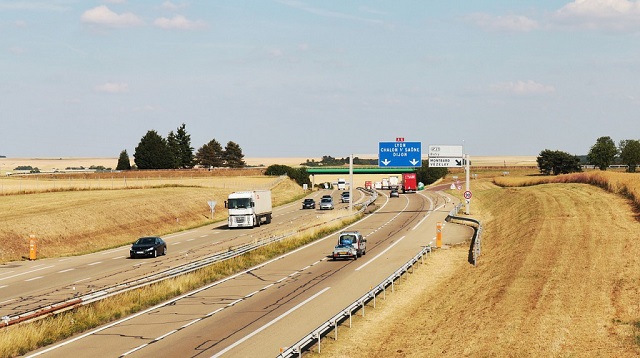 Driving in France can be a real pleasure: the road infrastructure is excellent and often provides vast, sweeping views of the countryside. You have the freedom to explore places that would otherwise remain inaccessible, since many roads have been built with the motorist in mind, to provide spectacular views of otherwise unreachable places. Also, as the country covers an area roughly twice that of Britain but with about the same population, traffic is rarely a problem except in a few large cities or during peak holiday weekends.

However, before setting off onto the French roads, it is vital to acquaint yourself with some basic principals concerning driving in France as well as the road network and administrative requirements relating to Driving Licences.

Most motorways are toll roads and entrances to them are marked as such with the word “Péage“. These tolls are either a flat rate, paid as you enter the autoroute, or based on how far you drive. When you pay based on distance, you take a ticket as you join the autoroute and then, when you exit, you give the ticket to the attendant at the kiosk and your toll will be calculated. Don’t lose your ticket as you will pay the maximum toll!

Although they may be expensive, these motorways are the only realistic way of covering large distances in a single day. However, if you have more time and don’t want to travel on autoroutes, the best way to avoid them is to use the “Bison fûté” map, (available at petrol stations, free of charge), which shows many alternative routes (itinéraire bis) across the country.

It is important to note that except on motorways, the French do not attach such importance to road numbers as the British do. So the rule is to follow a destination rather than a number, otherwise it could become quite confusing.

The most important rule is: DRIVE ON THE RIGHT!

If your car is right-hand drive, by law you must adjust the direction of your headlamp beams for driving on the right, either by using the stick-on adapters or by making an adjustment to the lights (available on modern cars). This applies especially if you drive by night, as UK headlights dip to the left, which means that they dip into the view of oncoming traffic when driving on the right.

If you are driving a foreign registered vehicle, a sticker showing the country of origin, must be attached to the vehicle, even if this is already indicated on the registration plate.

One law you must be aware of is priorité à droite. Motorists turning onto the road you are on, from the right, and in the direction you are travelling, have right of way. The exceptions are if the junction is marked by a stop sign, traffic light or solid white line, as well as at roundabouts, where cars to the left have the right-of-way. Be warned that there are places where you need to be extremely careful, especially in small villages and in the countryside, where traffic on minor road may have right-of-way when joining a main road.

The use of mobile cellular telephones are banned while driving, that includes the use of headsets, headphones or hands-free kits [RULE IN EFFECT JANUARY 2015].

While driving in France, It is compulsory to have your driving licence, car registration papers (Carte grise) and insurance documents (these must be the original documents).

As of the 1st of July 2008, you are required to carry not only a warning triangle in your car but also a fluorescent safety vest (one per passenger). More specifically, the safety vests must be carried inside the car and not in the trunk. The theory being that if you breakdown in a dangerous place you should put your safety vest on before getting out of the car. If you fail to have these available, the standard fine is around 90 euros per item. The triangle must conform to EU standards (European Directive 89/686/EEC), evidence for which is the stamp E 27 R and the high-visibility garment must conform to EU standards EN 471 or EN 1150.

Speed limits unless otherwise marked by signs, are follows:

Speed limits, as shown above, are implemented rigorously. Radar traps are frequent and anyone caught travelling at more than 25km/h above the speed limit can have their licence confiscated on the spot.Until 2007, cars registered outside France generally avoided getting speeding tickets when flashed by a speed camera. Be warned that this is no longer the case, as new agreements between European police forces have been adopted, meaning that details of any car caught speeding can be sent through to the offending motorist. Although the system is not yet 100% operational, the risk is still there.With regard to insurance; if you have UK registered car, you do not need a green card to travel within the European Union, but just your national car insurance certificate. Your insurer should be able to provide you, at no cost, with a “European accident statement form”, which should be used if you are involved in an accident. However, standard UK insurance generally only provides third-party cover outside the UK. Therefore, if you want fully comprehensive cover, you will need to obtain the extra cover from your UK insurer for the time you plan to stay abroad.

Drink driving: as everywhere, the best advice is not to drink if you drive. However, if you do so, be aware that the drink drive limit in France is lower than that in the UK, as a driver is considered to be driving under the influence of alcohol if his blood/alcohol level is equal to or exceeds 0.5 grams per litre (g/l).

Visitors staying less than 90 days and carrying a valid EU driving licence may drive in France. For longer periods, by virtue of the EU regulations (Directive 80/1263/EEC), holders of driving licences (changing residence or place of work from one Member State to another) used to have to exchange their licence within one year. But this requirement was abolished on 1 July 1996 and since then, exchanging of EU driving licences is purely voluntary.

Although it is not a requirement, an International Licence is recommended when driving in France, as it can facilitate contact with the authorities in the event of an accident or traffic violation. However, it is important to note that an international licence does not replace a driver’s licence. It merely accompanies it and acts as an official certificate of validity of the national licence as it is an internationally recognised document.

To Finish, a Few Words Relating to a Penalty Points Licence:

Please note that if a driving offence has been committed in France and points need to be deducted, a person resident in France using an EU or foreign licence will have to exchange it for a French one.

The permis à points came into force on the 1st July 1992.

Basically, the French driving licence has a maximum of 12 points. However, new drivers have just 6 points when they receive their driving licence for the first time and this driving licence is credited with two additional points every year (up to 12 points after 3 years, provided that no offence against the Code de la Route regulations has been committed within this period).

Each time a driving offence is committed, a certain number of points (between 1 and 6) can be withdrawn. However, if there are several offences committed simultaneously, a maximum of 8 points can be deducted.

In order to recover his licence, the driver must retake the written theory test, following the 6-month ban. If it is not the first time his licence has been withdrawn, not only must he wait one year, but he must also retake both the theory and the practical driving test.

In this case, the new driving licence provided is a six-month probational licence, and as such only has 6 points (instead of 12) for a period of three years. At the end of the probation period, and on condition that no offence has been committed that has resulted in points being deducted, the number of points is then raised to the maximum of 12.

•With thanks to Indra Balassoupramaniane

Previous Article Is this the time to move to France? Maybe!
Next Article Valentine’s Day and Romance in France

How To Change Your UK/Foreign Driving Licence for a French Permis de Conduire: Part 2/3