French breathalyzer (éthylotest) is required for all vehicles 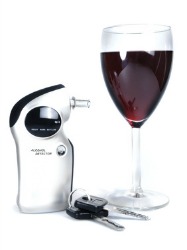 From 1 July 2012 any vehicle travelling in France needs to carry a usable ‘NF Approved’ breathalyzer kit. After 1 March 2013, failure to carry one would result in a fine. On January 24th the measure was postponed until further notice (sine die), but again on th 28th of February the measure was reinstated with one difference. The breathalyzer kit or éthylotest is once again mandatory for all vehicles but there will be no fine in case of non-compliance.

According to Securité Routier (the French equivalent to the Department for Transport) you should carry at least two disposable testers to make sure you always have one unused one in the car to comply with the new law.

Do beware though, only two disposable breathalyzers have been officially approved for the new law, with tens of others fraudulently saying they are approved but will not satisfy the gendarmerie. They must include the logo NF to indicate that they comply with French standards or Normes Françaises.

As well as the breathalyzer kit, drivers in France are required by law to carry a safety vest and a warning triangle in case of breakdown.

Previous Article A Londoner reaches the inner sanctum of the French language.
Next Article 5 Questions: investing in the south of France, a guest post by Rebecca Russell

Travelling by Ferry to France from the UK and Ireland

Do I Need Winter Tyres or Snow Chains When Driving in France?