From India to Sainte Nathalene via Guernsey! 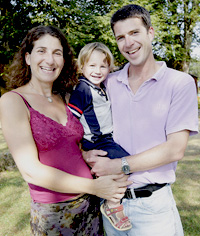 Living the Dream in Sainte Nathalene

The Dordogne has long been one of the favourite areas of the Hexagon for retirees wishing to ‘live the dream’. With its beautiful scenery, historical towns, quaint perigordiane architecture, it’s easy to understand the attraction. But not everyone who moves here is at the end of their working life and looking forward to taking it easy. It also has its attractions for those at the other end of the age scale, embarking on a new ‘career’ with a young family.

Natalie and Patrick McAlpine are just one such couple. Natalie, who is originally from Sydney, describes the path that led them to the Dordogne.

‘We met in India and lived and worked in London for several years. I was a town planner and Patrick had a research post at London University. Then we moved to Guernsey and both worked for the Island States Government. Ben was born on the island and life was great there. However there is a licensing system on the island which only allows newcomers to stay for a limited length of time to work. This meant we knew our stay would not be permanent.’

Both Patrick and Natalie had happy memories of family camping holidays and Patrick had worked on a French campsite after leaving university. As their time on Guernsey began to run out they spent more and more time considering whether they could turn their dream of owning a campsite into a reality.

In Patrick’s words, ‘Eventually we took the plunge, gave in our notice and moved to France, intending to spend the next year living as simply as possible and researching campsites across the country. We came to the Dordogne because we knew the area and were offered the loan of a house for a few months’. ‘ 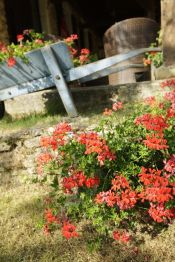 They had barely unpacked when they heard of a campsite for sale in the hills above the village of Ste Nathalene, between Sarlat and Souillac. ‘It ticked all our boxes and after hours with the calculator, we put in an offer. We moved in a few weeks after Easter and were planting the last geraniums in tubs when the first visitors arrived!’

While Patrick and Natalie share the admin and the day-to-day organisation, the restaurant is Natalie’s domain. She remembers the challenge of the early days. ‘ A friend who had run a campsite restaurant for 12 years gave me a week’s intensive training and some great tips. Then it was up and away.’

A keen helper on the campsite is Ben, aged three in September, who can usually be found filling his wheelbarrow with stones, grass or leaves, or giving visitors a health and safety talk about the dangers of the chainsaw which is locked in the shed.

Running a business in France means speaking the language is a must. During the winter there is time for French lessons and both Patrick and Natalie now have a good command of the language and are improving by the day. And after just over a year they feel settled into the small community of Ste Nathalene,

Patrick believes ‘The idea that the French countryside is full of chauvinistic French drinking bottles of red wine and hating foreigners is way out of date. Our neighbours are business people like us and appreciate that whatever brings visitors into the area benefits everyone.

‘We buy local produce for our on-site restaurant and use local work people. The mayor has been very helpful and we are on aperitif and coffee drinking terms with our neighbours.’

Like all children Ben is a great icebreaker. As soon as the family moved to France they found a French nounou or nanny so that his earliest memories would be both French and English. In recent months he has spent one day a week at the modern, purpose built crèche in Sarlat and will soon be going to ‘big school’ – the ecole maternelle in Ste Nathalene.

Already he slips effortlessly from French to English and back again’, says Nathalie, ‘although he tends to prefer ‘voila’ to ‘look at this’ and when impressed, will clap his hands and shout ‘bravo’ like a true Frenchman’.

A 9-5 working day is definitely long forgotten, as the campsite is open from Easter to the end of September and, with a gite, mobile homes and chalets, camping emplacements and an indoor activity space, there’s always plenty of work to do, so Patrick and Natalie are both quick to dismiss the idea that winter means idleness. 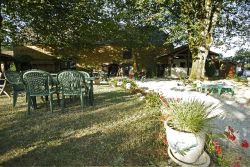 ‘Last winter we had to replace the windows and doors of our house in order to raise the temperature indoors above freezing point. We renovated three chalets, extended a road round the site and converted a barn into an indoor activity space.’

They now have a comfortable house and an indoor facility which gives them potential to extend their season by several weeks at either end of the season. They introduced yoga holidays in May and September and have had enquiries about French language and art and photography holidays. They also have a wedding weekend booked.

They don’t do everything themselves. During the high season Anna a medical student from Holland provides invaluable help, together with a handyman and a cleaner. This year numbers are swelled by Chris, a chef and an old friend from Guernsey, who is running the restaurant for Natalie, who is expecting a second baby in August.

When asked what she misses, Natalie is thoughtful. ‘It would be great to meet up with girlfriends for lunch and a chat,’ says Natalie, ‘but coming as we do from different ends of the earth, we have always had the philosophy that home is where we are and we have plenty of visitors even from as far afield as Oz.’

Do they regret the lack of security? ‘What security?’ asks Patrick ‘People who thought they had jobs for life are finding themselves out of work and final salary pensions will be long gone by the time we are ready to retire.

‘As for the future – we do have plans but nothing is written in stone and our priority is here and now. We are doing what we want to do, in a beautiful place and that’s enough for us. And at the end of the day, no matter how tired we are, it’s the view that does it, it always lifts our spirits.’