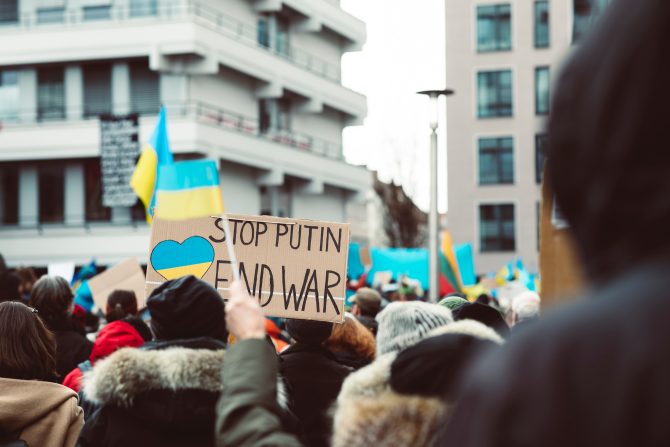 France stands in solidarity with Ukraine, there’s good news for French homeowners resident in the UK regarding social charges on capital gains, and this is the last chance to register to vote in France’s upcoming presidential elections. Here are the French news stories you need to know about this week.

1. France and the EU Support Ukraine

The news of Russia’s act of war on Ukraine has made headlines around the world over the past week, and France has been a strong voice in support of Ukraine throughout, pledging help “in all its forms”. On Thursday (Feb 25), French President Emmanuel Macron addressed the nation standing before French, EU, and Ukrainian flags as he lamented that: “The events of last night mark a turning point in the history of Europe”.

Demonstrations of solidarity with Ukraine took place over the weekend in Paris and many other French cities, and on Sunday, European Commission President Ursula von der Leyen announced further measures against Russia. These include a ban on Russian planes from EU airspace, the disconnection of Russia from the Swift network, sanctions on Russia’s central bank, a ban on Russian state media output, and a number of other economic sanctions. France’s finance minister has also announced the seizure of French bank accounts, property, and other assets of key Russian oligarchs and political figures, many of whom own French assets in the French Riviera and Paris.

The French tax authority has recently published an amendment to its tax guidance regulations, confirming that UK residents post-Brexit will continue to benefit from the social charges exemption on investment income and capital gains offered to EU citizens.

UK residents who own French property or investments are liable to pay social charges (a type of social security contribution) in France on their earnings regardless of non-resident status. However, the rate of these social charges has now been confirmed at 7.5%, in-keeping with the reduced rate previously offered UK residents when the UK was part of the EU. This is in contrast to the 17.2% rate that applies to non-EU residents.

Read the full article Social Charges on Investments and Capital Gains Post-Brexit: 17.2% or 7.5%?

3. Register to Vote in the French Elections

The deadlines to register to vote in France’s 2022 presidential and legislative elections are this week. Voting in these elections is only open to French citizens over the age of 18, so you won’t be eligible to vote unless you have French nationality. However, for the many Brits who decided to seek French citizenship post-Brexit, this will be the first presidential election in which they are eligible to vote.

France will be rolling out the Novavax vaccine from this week onwards, after ordering 3.2 million vaccine doses from the American pharmaceutical company. The Novavax Covid-19 vaccine is a ‘protein sub-unit’ vaccine and works differently to the mRNA vaccines of Pfizer and Moderna, the most commonly administered vaccines in France, a fact which the French health minister is hoping may convince some vaccine-sceptics to get vaccinated.

The Novavax vaccine will be available to over 18s in France and has currently been approved for initial vaccination only, a series of two jabs. The Novavax will not be available yet as a booster, and those vaccinated with Novavax will still require a Pfizer or Moderna booster vaccine within four months of the date of their final vaccine to maintain access to the Vaccine Pass.