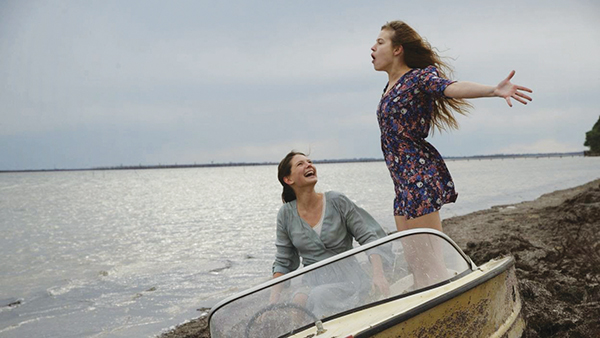 This emerging directrice’s second feature film is rooted in the familiar coming-of-age trope, yet a clichéd tale of teenage angst this is not. Best-known for her acting role in Quentin Tarantino’s Nazi revenge fantasy Inglourious Basterds, Laurent’s Breathe pays testament to her insight and depth of skill as a burgeoning director, even more than her debut of 2011, The Adopted.

Our protagonist is a withdrawn schoolgirl, Charlie (Japy), whose life in a small, hard-up town is derailed by the arrival of Sarah (De Laâge), a confident and sophisticated newcomer at her lycée. Like a less raunchy version of Blue  is the Warmest Colour, they quickly become inseparable, the friendship assuming the intensity only found between teenage girls. But as Sarah progressively infiltrates Charlie’s life, complex emotions begin to rupture their tight bond.

The leads are highly engaging – Japy portrays each nuanced emotion with finesse, while De Laâge is the expert embodiment of a damaged young woman desperately searching for escape and self-affirmation. The progression of their relationship is convincing and absorbing.

Laurent employs a pale, hazy film quality allied with virtuosic travelling shots and lingering close-ups which render the nostalgia of young love and raw adolescent emotion. She’s a director to watch: youthful enough to  do the subject justice, yet with a depth of intelligence  that reveals wisdom beyond her years. ★★★★