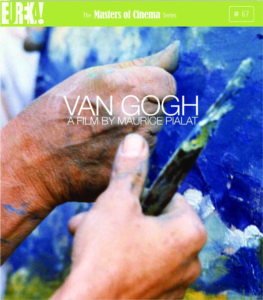 French singer Jacques Dutronc won – perhaps suprisingly – the casting call to play the legendary brushman Vincent Van Gogh in Maurice Pialat’s definitive biopic, which now gets a DVD and Blu-Ray release, thanks to the Eureka Masters of Cinema series. Thanks to its loose factualisation of the latter days of the great Dutch painter’s life, we meet the artist as he arrives at Auvers-sur-Oise, to come under the care of Dr Gachet (Gérard Séty) for his nervous agitation, then follow his descent from conviviality to darker moods. A raft of extra includes a short, early documentary about the painter by the director, interviews with Pialat from 1992, chats with actors Jacques Dutronc and Bernard Le Coq, deleted scenes and a 56-page booklet.