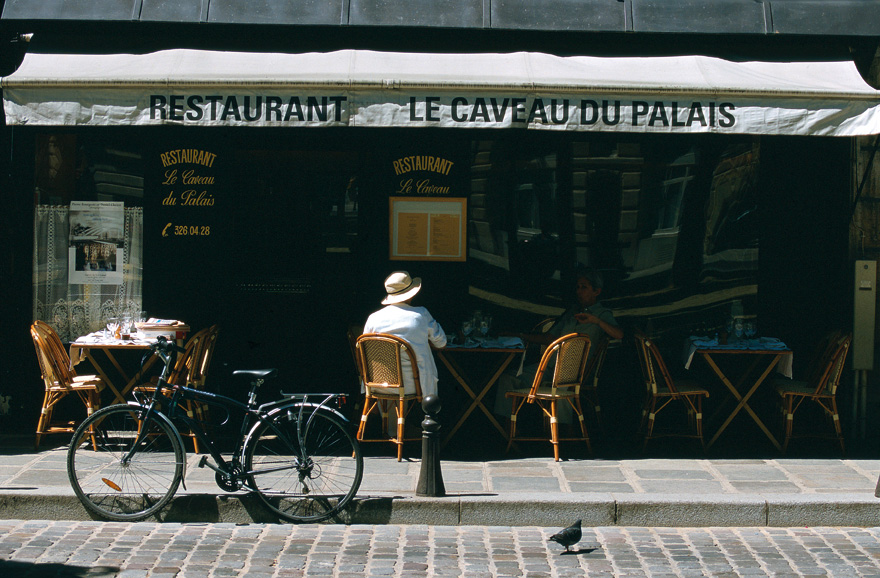 People watching is by far the most entertaining sport in Paris. Many participate in this sport while seated outdoors at a café. Others may partake in Parc Monceau or Jardin du Luxembourg. I take my people watching seriously. For me, it has to be in the Place Dauphine.

Situated off Pont Neuf in the first arrondissement and just a stone’s throw from the sixth, it’s a beautiful little square. Place Dauphine is a hub of activity during the warmer months. The few trees in the square are alive with colour, just like its inhabitants.

Groups of people, both young and old, come here to compete in friendly games of Boules. Men in perfectly tailored suits walk briskly towards the beautiful Palais de Justice. Women in five-inch stilettos confidently hit their stride on the dry soil of the square, leaving clouds of dust behind them while miraculously keeping their heels perfectly clean.

Children who live in apartments along the square run after their dogs. Young lovers enjoy a moment together on a bench. Old lovers enjoy a glance at the young lovers. The well dressed. The scruffy. Bourgeois bohemians, better known as ‘bobos’ – the French equivalent of American ‘hipsters’ – sit smoking their Gitanes and pondering the meaning of life in their trendy attire. I never tire of the stories that I can make up in my mind about the lives of these people I observe. Are they happy? Sad? Content? Lonely? Fulfilled?

I’ve witnessed the police run after a band of gypsy children, the gypsies winning the run, but not returning for the remainder of my stay. I’ve watched men hoisting furniture, with only what appeared to be ropes, up to the top floor of an apartment building. I’ve wondered what kind of neighbours Yves Montand and Simone Signoret would have been when they lived on this square.

In the cooler months, Place Dauphine is a wonderful respite from the noise and hustle of the rest of the city and is a place to just sit and observe the passers-by. Some slip into a bookstore, some enter the stairway at the far end of the square, which leads to an underground parking lot. Some catch a meal at one of the restaurants that line the square. The wintry lighting turns the colours of summer into a monochromatic study of greys and sepia tones.

During these months activity carries on, but in a less carefree way. People run through the square just to get to a destination – ­unlike in the summer months, when Place Dauphine is the destination. Still, you can never tire of watching and studying the Parisians. You learn a lot about them this way, and you don’t have to be an expert in the language.

Give me a bench, a few spare moments and clean eyeglasses to see out of, and I’ll never tire of the great sport of people watching, especially in this elegant square in Paris.

Check out the properties Paris has on offer.