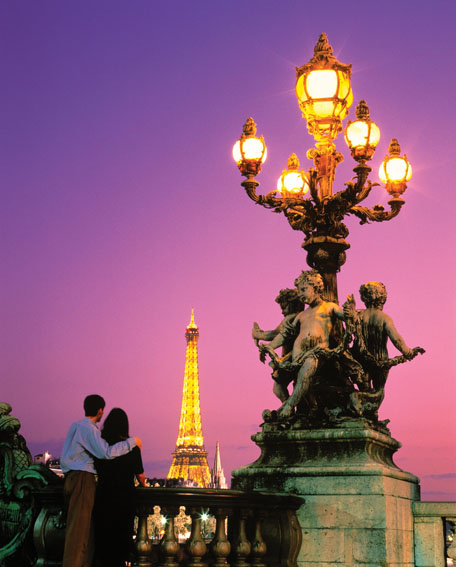 The French are renowned as a nation of romantics. From the amorous cartoon skunk Pépé le Pew with his overcooked accent to gorgeous actors like Jean Dujardin and Gregory Fitoussi, the romantic ideal often adopts a French accent. And, of course, we wonder if this reputation is justified.

Valentine’s Day in France is curiously understated. One of the cultural surprises for me, early on in my life in Brittany, was that Valentine’s Day seemed to be far less important here than in England. Having looked into this further, it’s not a regional difference, it’s widespread: it seems the French care less about Valentine’s Day than either the British or the Americans.“It’s all commercial hype, isn’t it?” remarked one of my French colleagues, and another said, “it’s only a modern marketing gimmick, isn’t it, Valentine’s Day?” In fact, it’s an ancient tradition that dates back to ancient Rome: there was even an historical figure, by all accounts, a real Saint Valentine who was martyred on February 14th back in the third century. Tell this to the French and they’re generally sceptical, muttering, ‘I thought it was a twentieth-century invention’.

My theory is that the French have never really adopted Valentine’s Day because they’re not a nation of card-givers. They don’t really ‘do’ cards on birthdays or other occasions except as a rather charming and quaint gesture. In England, we’re writing and sending Christmas cards weeks before the event itself; notice how in France, the equivalent tradition of New Year cards occurs after the big day, and you have the entire month to send out the cards. (I make no comment on the French and their time-keeping.)

I have conflicting yet intense memories of Valentine’s Day as a child in England. There was the anticipation, discussing with friends whether we would send cards to the boys we longed for, how obvious should it be that we had sent it, without actually signing the card… and of course the joys and disappointments of your own card count on the day (my record stands at five, and one anonymous card whose sender I never did identify but suspect it might have been a kindly paper-round customer taking pity).

“It’s certainly not a tradition for children in France,” confirms my friend Gwenaëlle in response to my happy descriptions of English Valentine traditions, “in fact, it’s really only for couples who are already together. Maybe they go out for a dinner, or give a gift, but that’s about it.”

And her reaction to anecdotes of UK colleagues sticking Post-It notes on each other’s computers or packing heart-shaped sandwiches for spouses? “Non! Really? No, I can’t imagine this in France!”

Well, no, I suppose not.

Of course Valentine’s Day does exist in France, as evidenced by the inflated prices of flowers and by the Valentine specials in restaurants and hotels. Besides, any Frenchman worth his reputation will tell you that they don’t need February 14th because they are the kings of romance all year round. Yet all the Frenchmen I know fell curiously silent when asked what was their most romantic Valentine’s gesture.

“I did buy my wife a Valentine’s present last year,” nods my colleague, Arnaud, with a small smile that doesn’t bode well. “I bought her a friteuse – what do you call it? A deep-fat frier? She knows I love her; I said maybe I could love her even more with some home-made chips.”

It’s not the most romantic Valentine’s gift, but it’s the most memorable and it makes me smile just to picture her reaction…