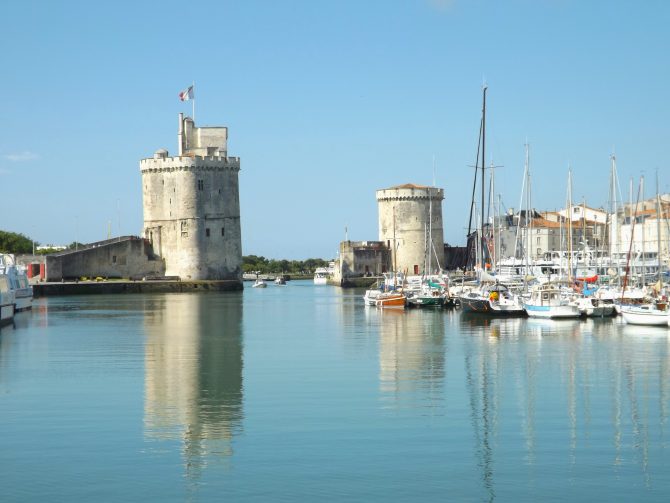 This postcard-worthy département has it all: lush countryside, beautiful beaches, great weather and a clutch of tiny and very exclusive islands – not to mention plenty of eye-catching property.

At the beginning of August, the TGV from Paris’s Gare Montparnasse to La Rochelle is packed tightly with well-heeled Parisians heading off on their summer holidays. While in August 2021 it might not be quite so full – for pandemic reasons, obviously – it will be busy all the same, for just beyond La Rochelle is the holiday island of Île de Ré, favourite summer haunt of France’s wealthier classes.

This island is arguably the most famous spot in the west-coast département of Charente-Maritime. According to the Rough Guide: “With misty beaches, green-shuttered cottages and lonely coves, Île de Ré is one of the loveliest places in western France. Out of season the economy rests on oysters and mussels, while in high season 400,000 visitors pass through, many of them rich Parisians, and the island is a little less tranquil. Designer boutiques, high-class restaurants and luxury hotels are the norm.”

While visitors to Charente-Maritime will have their heads turned by Île de Ré, property on the island can be eye-wateringly expensive. Plenty of reasonably priced homes can be found across the rest of the département. The coastal towns such as La Rochelle, Châtelaillon-Plage and Royan, and the larger Île d’Oléron will give you a taste of the maritime, while inland there are sleepy villages, rolling farmland and attractive towns such as Surgères, Saintes, Saint-Jean-d’Angély and Jonzac. The climate here – which the locals love to remind you is the sunniest outside of the Mediterranean – also makes this region very popular for second homes.

Halfway down France’s Atlantic coast, the département of Charente-Maritime falls into the much larger administrative region of Nouvelle-Aquitaine. It stretches from the Pertuis Breton (the Breton Strait) in the north, down to the massive Gironde estuary in the south, encompassing its rather chic prefecture La Rochelle, as well as the towns of Rochefort, Saintes, Saint-Jean-d’Angély and the seaside resort of Royan. Pretty Île de Ré and Îe d’Oléron (both of which are connected to the mainland by bridges) are also part of the département, as is Île d’Aix. Oh, and the tiny Île Madame.

Life in Charente-Maritime is heavily influenced by the Atlantic Ocean, which laps at its more than 450kms of coastline. Along much of it you’ll find beaches, seaside resorts, water sports, old naval bases, nature reserves, migrating birds, oyster beds, salt beds and vast expanses of sand when the tide goes out. Inland, where the countryside gives way to low, rolling terrain, plains and plateaux, you’ll find multiple producers of both pineau des Charentes and cognac. While the town of Cognac itself is in a neighbouring département, Charente-Maritime does boast many producers.

Part of the famous Marais Poitevin lies within Charente-Maritime, in the far north of the département. Known as “La Venise Verte”, this vast labyrinth of pools, streams, marshes, ruined buildings and beautiful gardens covers an area the size of the Isle of Wight. Visitors can hire traditional barques and explore from the water.

There is also a handful of UNESCO World Heritage sites across the département, including the Église Sainte-Eutrope in Saintes, the Église Saint-Pierre in Aulnay-de-Saintonge, the Abbaye Royale in Saint-Jean-d’Angély, the Hôpital des Pèlerins in Pons and the Vauban fortifications in Saint-Martin-de-Ré.

The département covers 2,650 square miles, with a population of 642,000. The main airport is at La Rochelle, currently with links to Bristol, Gatwick, Stansted and Manchester. Autoroutes make travel across Charente-Maritime quick and easy.

Warmed by the Gulf Stream, this département enjoys a mild and sunny climate perfect for outdoor living, with less than 900mm of rain a year. Along the coast, winters rarely get too cold.

It all starts with the seafood, naturally. And sooner or later, you’re going to find yourself shucking an oyster. These bivalves are the star gastronomic attraction on this portion of the Atlantic coast, but the most famous of all are the Marennes-Oléron oysters, which spend the latter stages of their lives in brackish water, giving them their distinctive nutty flavour.

The mussels here – many of them grown on ropes curled around long wooden poles, or bouchots – are rather special too. For a bit of turf with their surf, some Charentais eat garden snails in a dish called cagouilles à la Charentaise – snails cooked in white wine, carrots, garlic, onion, thyme, bay leaves, tomato and a dash of cognac.

According to the property website www.meilleursagents.com, prices across the département remained fairly static between the economic crisis of 2008 and 2017. But over the past three years, they have seen a gradual rise. The average price for a house currently stands at €2,599 per square metre, and €3,165 per square metre for an apartment. Coastal regions are able to command the highest prices, which drop substantially the further east and inland you head.

However, these property prices are dwarfed by those of Île de Ré. Here, in the capital Saint-Martin-de-Ré, for example, houses cost an average of €7,166 per square metre and apartments €5,717; enough to make your champagne boil in its bottle.

The Walsh family – Amanda, Tim and their two daughters Eleanor and Lisbeth – bought their second home and rental property in the Charente-Maritime countryside in 2010, not far from the little port town of Mortagne-sur-Gironde on the Gironde estuary.

Tim has since retired from his job in London and is now helping Amanda sell the property in order to buy a smaller B&B. Eleanor and Lisbeth go to school nearby. “We wanted to give our daughters as much opportunity as possible in life,” says Amanda, when asked what prompted her relocation abroad. “We think that being bilingual is a distinct advantage. Plus, we think the French schooling system is better than the UK’s; and I’d had enough of working in banking in the City and wanted to run my own holiday business in France.”

It was the architecture and proximity to the Atlantic beaches that first drew Amanda and Tim to Charente-Maritime. “The Charentaise stone is beautiful and makes the most wonderful houses. We are so close to the beaches, yet far enough away not to be swamped by tourists in July and August.”

Amanda says she and her daughters adapted quickly to the French way of life. Lisbeth was four when they first arrived, while Eleanor was five. “Within a few months, they were both perfectly capable of speaking in either language,” she remembers. “They speak English like a native English-speaker and French like they’re French – no funny accents. And I studied French so, for me, the language is not a barrier.” For Tim, however, it was more of a struggle since, for the first 10 years, he commuted to France at weekends. “He has found it challenging and frustrating in equal measure,” Amanda explains. He studies at a local language school.

The family love the combination of maritime and rural living that the region offers. “We live in the middle of the countryside with no neighbours, but we’re less than five minutes from the port, which is a hive of activity. It’s absolutely charming with some lovely restaurants and bars. It comes alive in the summer with festivals and celebrations.” Amanda warns that decent restaurants can be very expensive, however. “Thankfully I adore cooking, so I have an absolute ball in the kitchen, cooking real French food with the very best locally produced food, which I buy every week from the market.”

While Amanda and her family love Charente-Maritime, she stresses just how important language skills are for any Britons wishing to relocate there. “Given that it’s incredibly rural, the locals are not keen on foreigners. But if you make the effort to speak French, they open up. They are very genuine people and will do anything to help.” The infamous French bureaucracy is a major headache, she warns. “But if you have a really good knowledge of both written and spoken French, then absolutely come to France and give it a go.”

Dreaming of Buying Property in Charente-Maritime?

If you’re looking to buy a French property, set up a gîte, or move to France, our Essential Reading guides are designed to talk you through every step (and potential misstep!) of the process. Once you’re ready to get searching for your dream house, you can browse our property for sale or sign up for free to become a FrenchEntrée member and set up customisable property alerts. The market is moving quickly at the moment, so make sure you don’t miss out!

Properties for Sale in Charente-Maritime