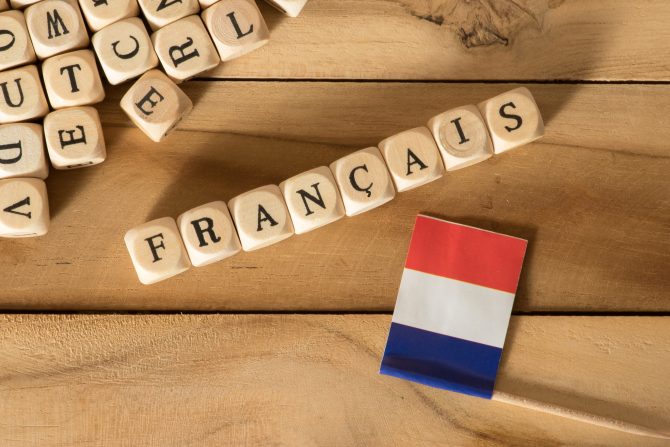 2022 has been a year packed full of global events, from the Ukraine war and the consequent surge in energy and petrol prices to the death of Queen Elizabeth II and the almost-victorious 2022 FIFA World Cup in Qatar. Not to mention France’s presidential and parliamentary elections, which took place earlier this year.

As we’ve brought the news to you in our weekly News Digest, we’ve also added plenty of new French vocabulary to our lexicon. In no particular order, here are 22 French words and phrases that we didn’t know before 2022.

Let’s start with a fun one! President Emmanuel Macron made headlines around the world back in January 2022 when he publicly stated his desire to “emmerder” the unvaccinated by introducing the controversial Vaccine Pass. Even more amusing was watching the English-language press around the world attempt to translate the word, which literally means ‘to put in the shit’, but more accurately translates to “piss off”.

Another one added to the 2023 Larousse French dictionary, “Séparatisme” is a word you’ll likely have heard come up when talking about the Russia-Ukraine war, as well as in national debates around religion and immigration.

As France’s presidential elections took place earlier this year, you’ll probably have picked up lots of new politics-related lingo. Like “Le Scrutin”, another word for “the vote” or “ballot”, You might also have heard “Le jour du scrutin” (polling day) and “les scrutateurs” (the vote or ballot counters).

Around 6% of voters filed a ‘blank vote’ in the second round of the 2022 Presidential elections, essentially voting against both opposing candidates.

If you were following news of Marine Le Pen’s far-right National Front party, you might have heard talk of the “Dédiabolisation” of the party. The word literally means to “take the devil out of” something, and in this instance, it referred to Le Pen’s mission to rebrand the party’s far-right image.

A political “remaniement” is a restructuring or reshuffle, such as newly re-elected President Macron’s “remaniement ministériel” – parliament reshuffle. Bonus tip: property renovators can also nab this word to talk about a re-design or re of a structure, space, or garden, for example “un remaniement d’un jardin” or “un remaniement de toiture”.

Another election-related word, parrainage means sponsorship and at least 500 parrainages

(signatures) from elected officials are required to launch a presidential campaign. You might also hear the word used to describe referral programmes or benefits – for example, an offre parrainage when you recommend a friend to sign up for a service or activity. A “parrain” is also a godfather – like the famous movie The Godfather or “Le Parrain” in French.

France’s “crise énergétique” or energy crisis has been a big talking point in recent months, with the government releasing its winter “Sobriété énergétique” (energy sobriety strategy) to help manage the crisis through the winter months.

With all the talk this winter of energy grids getting overloaded and possible planned power cuts, you might have heard the word “délestage” or “délestages électriques” , the French word for “load-shedding”.

There’s been a lot of talk about the “pouvoir d’achat” (purchasing power), especially in debates over the cost of living crisis or the “crise du coût de la vie”.

Another key word when talking about the energy crisis, the “bouclier tarifaire” is the tarif shield that the French government has put in place to protect French consumers from inflation-related jumps in energy prices.

Soaring petrol prices have been a common source of woe for drivers all around Europe, but French residents have been protected from the worst of it in 2022 thanks to the government’s “remise carburant” or petrol subsidies.

Anyone living in France surely knows the word for “grève” (a strike), and this year had its fair share of strikes, especially among train and airport workers. You may also have heard calls for a “grève générale”, which refers to a general strike across multiple sectors. Thankfully, this is rarer in France – the last ones were in 1995 in opposition to proposed pension reforms.

There are lots of ways to talk about the hot weather in French, and this summer’s multiple heatwaves gave us all plenty of opportunities to moan about the heat! One phase to describe a particularly hot sun is a “soleil de plomb”, which literally translates as a “heavy-as-lead sun”!

France joined the world in mourning the death of British Queen Elizabeth II back in September, and talk then turned to the “couronnement” (coronation) of King Charles III, set to take place on May 6, 2023.

One of 150 new words added to the French Larousse dictionary this summer, “Wokisme” comes from the anglophone word “wokeism” to mean “woke-inspired ideology centred on questions of quality, justice, and the defence of minorities”.

France’s word for the English “fatphobia” also made it into the dictionary this year, demonstrating the cultural shift in conversations around weight, obesity, and body image in France.

“Les rosbifs”, “Les beefs”, or “les rosbeefs” – the roast beefs – is France’s nickname for the English, and if you’re English in France, you’ve probably heard this one before. If not, you certainly would have in the run-up to the England-France match in this year’s World Cup, probably as part of a phrase like “On va bouffer les beefs !” or similar.

Sure, you probably already know how to order a coffee in French, but you might also have heard the expression “Café crème” while watching the World Cup matches in France. “Café crème” (or sometimes café noisette or double espresso) is used to describe a particularly artful dribbling streak that outsmarts the opponent.

What new French words did you learn in 2022?

Did you already know any of these words before 2022? Which words have we missed? What new French words did you learn in 2022? Let us know in the comments below!