First published: 13th May 2015 by FrenchEntrée 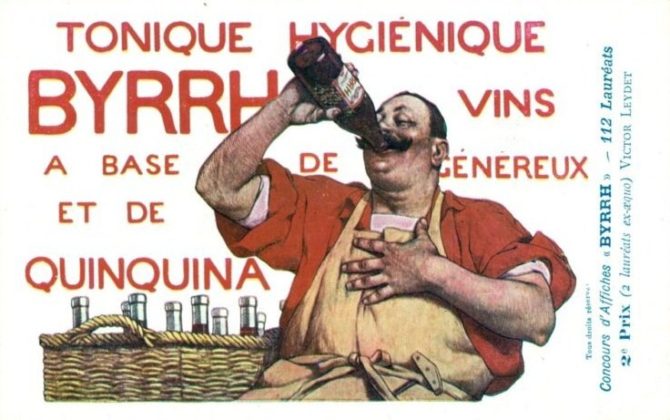 Enjoy a morning visiting the Caves de Byrrh in Thuir, Pyrenees Orientales. Jamie Sandford takes us on a guided tour of this historic winery.

During my travels around France I have always had a fondness for the old worn colours and soothing inscriptions of the antique advertisements on the sides of buildings. They seem to me as French as the Art Nouveau designs of the Paris Metro or the paintings of the Impressionists. And ever since I can remember seeing these faded images of a bygone time I have been aware of one very strange word…”Byrrh”!

I knew that Byrrh was some form of liquid but little more, and as I couldn’t remember ever noticing it in a shop I assumed it had long been discontinued. Wrong. Byrrh is alive and well and made in the Byrrh cellars at Thuir in the Pyrenees Orientales. And a fine aperitif it is too.

The cellars were built at the end of the 19th century by the Violet brothers who originally created Byrrh as a vitalising tonic, with limited success. Once they started marketing the drink as a wine-based aperitif business picked up and the seven hectare site at Thuir was built. Such were their ambitions that on this site is the railway depot built by none other than a certain Gustave Eiffel which was still transporting produce in and out until 1989. Sadly, trains no longer run into the Thuir depot, but the station concourse is still impressive.

When whiskey became popular in the 1950s, the family faced strong competition in the market place and in 1961 sold the business to CDC who made Dubonnet and Cinzano, which was later merged with Cusenier. The cellars now produce many different aperitifs including Suze, Ambassadeur, Dubonnet and Soho. The tour follows the different stages involved in making Byrrh all of which happen on-site, from maturing the wine, infusing it with ten different spices to gives its unique flavour, chilling it, filtering it and then bottling it. The wine used as a base for the aperitifs comes primarily from the wine co-ops of the Languedoc Roussillon using a variety of grapes, such as Muscat, Grenache and Carignan, and every year 20 million litres of wine-based products are delivered, blended and bottled at Thuir.

During the tour we are shown a very large oak vat which from 1934 to 1950 was the largest vat in the world, and with a height of 7m 20 it’s not difficult to believe. So where, I hear you cry, is the world’s largest oak vat now? From the moment the first vat was finished in 1934, preparations began for its successor. Fifteen years later, in a hangar all to itself, the new record-breaking oak vat was completed and what a beast it is! Twelve metres wide at the base and ten metres high, this vat can hold 1,000,200 litres and weighs 1100 tonnes when full. That’s quite a lot of Byrrh!

How to drink Byrrh
Serve straight, cold (12 – 14°) but not chilled and without ice, with a little lemon zest or a slice of orange. Byrrh Blackcurrant is made by adding a dash of blackcurrant liquor. Byrrh Lemon is made by adding soda water and a spot of clear lemon syrop. Enjoy!

For reasons of safety and secrecy we were not able to go into the bottling plant, which was a bit disappointing (I’m fascinated by these mechanical production lines), but in the cellars’ shop I was soon mollified by the tasting of various aperitifs, as well as the chance to buy one of the poster reproductions of the many iconic Byrrh advertising campaigns from the past. The poster now hangs on my wall to remind me of a thoroughly enjoyable visit, which I would happily reccommend!

The Caves Byrrh are located at 6 boulevard Violet in Thuir, which is 20 kilometres west of Perpignan in the Pyrenees-Orientales

Tours of the Caves last about 45 minutes, and group tours in English, German or Spanish can be arranged with advance notice.

Previous Article Rare opportunity: A brand new detached ski chalet in the Alps
Next Article Turning the page: writing and running gîtes in the Lot