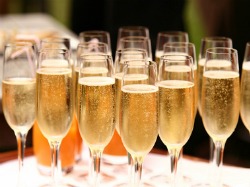 You may have thought to yourself, why does champagne cost so much? And that’s a very good question. However, when we understand how this famous drink is made, the time, dedication and passion that is put into it, we could be asking ourselves, why is it so cheap?

Champagne is a complex product, and unlike still wines, undergoes a second and sometimes third process before it reaches the shops. Here’s what happens from grape to glass in a nutshell.

First the vines are planted in the vineyard, and keep in mind that the average vine doesn’t bear any fruit for about three years. When the grapes produced are harvested, the picking is all done by hand. Why? I’ll explain that a little later, but first let’s remain with the process.

The grapes are then crushed, mechanically this time, to extract the juice which is called “must”. The juice is then transferred to large vats, usually stainless steel but not always, to begin its first natural fermentation. This is caused by the reaction of the yeast on the skins and the natural sugar in the juice. When you visit Champagne at this time of year, around the middle of September, you’ll be struck by the smell of alcohol in the air.

We’re going to leave that process to take its course over a period of about six weeks.

So now we have a vat full of still wine ready for the next process. Enter the cellar master. He will start his work by selecting various still wines from his reserve collection kept back from previous years’ harvests uniquelyfor the purpose of blending. Why? The aim of the cellar master is to deliver a consistent product to the consumer. Unlike Bordeaux wine for example, which tastes different depending on the weather conditions etc. during the year, we are looking to create a similar product every year, regardless of how much it rained, or how much sunshine we enjoyed.

So he takes his secret recipe, and begins the blending process. He will use his experience and skill to create a still wine blended from many different grapes, from many different years to deliver the still version of what will become the bubbly version later.

So how do we get the bubbles in the bottle? After the cellar master is satisfied that his creation is right, a small amount of new yeast and sugar will be added to the bottle, to activate the second fermentation, this time in the bottle, so the bubbles cannot escape, and so we end up with a bubbly wine. At this stage, the bottles are then laid down horizontally in the cellar to age. Again, unlike still wine, which is sold almost as soon as it’s been bottled, champagne is laid to rest in the dark underground cellars below the towns and villages of the region for a minimum of 15 months and sometimes up to 10 years. Imagine the financial investment required if your product is not ready to sell for 10-15 years!

Anyway, back to the process. And there’s a problem with the sediment left over from the second fermentation process and it’s stuck in the bottle. This problem foxed many a cellar master in the past, including Dom Perignon, until later, Veuve Clicquot who was a pioneer in this part of the world, discovered that by drilling holes in her wooden kitchen table, she could put the bottles into the holes, neck down, and gradually turn them to the right and to the left, into a vertical position, coaxing the fine sediment down to the neck of the bottle. This process today takes about 6 weeks and is done mechanically usually, although many of the small champagne producers still undertake this job by hand. It’s called “riddling” or “remuage” in French.

Now we need to get the sediment out. So we plunge the bottles neck-down into a freezing solution, a small ice-cube forms in the neck, we remove the cap and bingo, the sediment is gone and the bottles are ready to be corked, washed, labelled and sent off to the shops.

And why do we pick the grapes by hand? Because champagne is the only white wine made from black grapes and we don’t want those dark skins contaminating the clear white juice inside the grapes. More about the grapes in Part 2.