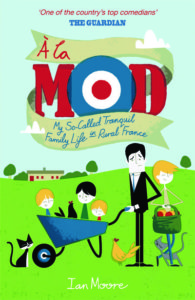 Ian Moore is a British comedian, famed for his mod-inspired, cynical spin on the world. This earthy grumpiness translates just as well on the stage as it does on the page in his book, which documents his young family’s relocation from a small suburban house in a cold, depressing town he despises, to the tranquil consign of the beautiful and serene (or so you’d think) Loire Valley.

Every mod’s mantra is to ‘look their best at all times’, but with all the animals that his wife and three young boys have taken in (much to his despair), this neatness is forced to be compromised. A delightful rendition of adjustment, family, France, and the occasional bout of pond dredging. ★★★★