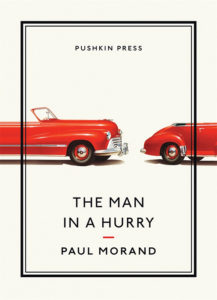 The man in a hurry
Paul Morand, Pushkin Press, £15

This re-released masterpiece by one of the modern maîtres of French prose is a fable which criticises life lived in a hurry. The author – a controversial, cult figure renowned for his short temper and impatience – self-critiques in this irony-filled, autobiographical tale of an antiques dealer who lives in fast-forward, surrounded by others seemingly in slow motion. But when he falls in love with unpunctual Hedwige, our hero learns to slow down and sees that as he races through life, it’s passing him by.

The book was first published in 1941 and its poetic prose has the gravitas of a classic. Yet the characters and the moral of the story seem more applicable today than ever before. ★★★★