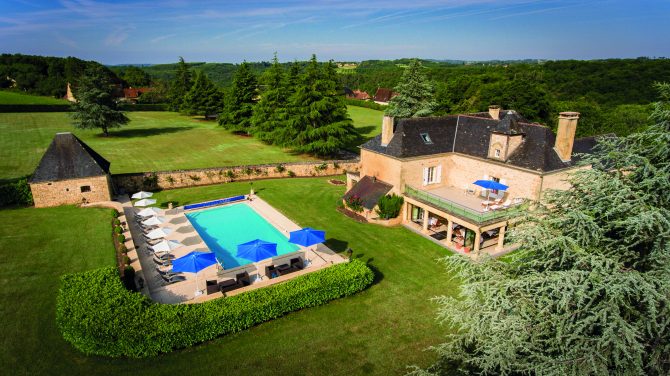 Kerry and Tomas Flaherty-Rask, a pair of high-flying IKEA executives, made a fresh start running two properties converted to provide luxury holidays in the Dordogne.

When a couple who have travelled and lived in as many countries as Kerry and Tomas Flaherty-Rask tell you they’ve found the perfect place to settle, you’d be wise to believe them.

They met in Sweden while they were both pursuing high-flying careers at iconic international furnishings company IKEA. Even before they became an item, Kerry, born and raised in the Somerset countryside, had spent years travelling extensively in Spain, the Middle East and the USA.

Since then, she lived in Sweden for two years with Tomas, before they both headed to Russia to play their parts in establishing and expanding the IKEA brand there, which involved spending six years in Moscow. Next came a spell in London, then a five-year stint in the Polish capital Warsaw, all before a move to Paris, which saw the couple buying a property in the countryside just outside the city, near Versailles.

“We’ve both had more than our fair share of experiencing life in other countries,” laughs Kerry, “and we certainly have a pretty broad frame of reference when it comes to comparing the lifestyles and opportunities available across a lot of the world.”

So when this globe-trotting duo decided to put down roots, it was in a place that ticked all their ‘quality-of-life’ boxes. The place that Kerry and Tomas finally chose for themselves and their eight-year-old daughter, Evie, was the Dordogne.

If you thought there’s a very good reason why the Dordogne has been beguiling both holiday makers and permanent relocators from all over the world for decades, you’d be wrong – there are at least three, as Kerry and Tomas will confirm. Firstly, it provides some of the country’s most idyllic scenery, generously dotted with ten of France’s Plus Beaux Villages, not to mention stunning medieval architecture, impressive Roman remains and limestone caverns adorned with some of the world’s most important prehistoric cave paintings.

Then, of course, there’s the climate. The Dordogne benefits from cool winters and long, hot summers with temperatures from the start of May to the end of September averaging 25°C. And while we in the UK make do with less than 1,500 hours of sunshine annually, this pocket of France enjoys over 2,000.

Last, but not least, the region produces some of France’s most delicious and iconic foodstuffs, from truffles to chocolate, walnuts to strawberries, plus a plethora of superb cheese varieties and fine wines.

“Having made the decision to stay in France and make a living on our own terms by offering luxury holiday lets, we obviously wanted somewhere that had real pull,” Kerry says, “a region that offers treats for dedicated Francophiles, reliable sunshine, spectacular scenery and all the other elements that make for a truly memorable holiday.

“Another big factor for us choosing this region,” she continues, “was that, although it appears incredibly rural, it is probably one of the easiest areas of France to get to from the UK, with Ryanair and easyJet both operating regular routes to Bergerac and Toulouse. Plus, from a personal perspective, we wanted to be nearer to my sister and her family, who were living in Chamonix in the French Alps.”

Although the couple had been discussing the idea of running their own luxury lettings business for some time, the push they needed finally came in early 2016 when Tomas was made redundant. Destiny often has a hand in decisions of this scale, and in Kerry and Tomas’s case, this was only the first of two cards it was about to play.

“We’d been casually keeping an eye out for properties with potential for a while,” recalls Kerry, “just getting an idea of what kind of places were available for our budget – but now it was time to take the plunge and put our database to serious use.”

In fact, this is a bit of an understatement, as in the course of finding their Dordogne home, the couple actually sourced around 200 properties online before travelling to over 40 to conduct viewings.

Early on in the process, on a balmy spring day in May 2016, the couple visited a charming 18th-century property, Les Charmes de Carlucet. It was a classic confection of honey-coloured stone, sitting alongside a pair of two-storey outbuildings from the same period, all set in a generous two hectares of lush private grounds with sweeping views across the verdant heart of the Périgord Noir. Better yet, all this was within their budget – the property even came with a new 15x7m swimming pool.

“It was perfect,” Kerry recalls. “In fact, so perfect that the people who’d viewed it the day before had offered the asking price literally as we arrived!”

Inspired by the scope of what was potentially available here within their budget, the couple continued their search, yet as summer mellowed into autumn they had still not found a property that fully matched their requirements – let alone measured up to the idyllic Les Charmes de Carlucet they’d viewed on that day in May.

“Every time we looked at a property that was nice enough, but not quite right, we kept thinking of the compromises or concessions we’d have to make if we took it on. This inevitably led us back to thinking about Les Charmes de Carlucet, looking over the little valley towards the nearby 11th-century church. It really did become our yardstick – and nothing else was quite measuring up.”

“It turned out that the sale with the other buyers had just fallen through,” explains Kerry, “and after searching fruitlessly all summer for something almost as good, we didn’t hesitate for a moment!” 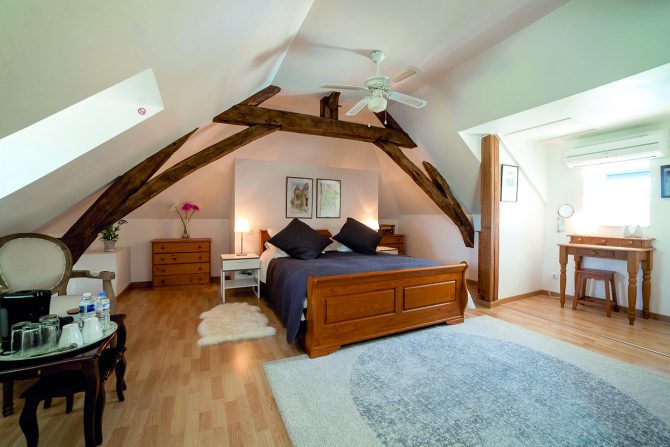 By February 2017, the property that nothing else had quite measured up to was theirs, and their French guest house adventure was about to begin. “This,” says Kerry, “was another great advantage of the beautiful property; it had previously been run as a B&B. The two outhouses had already been converted for habitation and, in theory, the place was actually ready to go.

“However, the condition of the interiors was a different matter altogether. The place was very dated, with décor and fittings from the 1980s, and everything was just very rundown – but this was where we were going to enjoy putting our own stamp on the property, with a full refurbishment to create modern five-star accommodation.”

So the couple got to work, employing local builders and craftsmen to give the impressive home a major update.

“Not only did they do a great job,” says Kerry, “but using good local people really helped us to integrate into the community right from the start, which is still really important in such a rural location.”

Better yet, thanks to the dedication of the local team, the couple were able to open their doors in late May. They welcomed their first paying guests to a historic home that, while dating from 1767, now offered luxury, high-spec mod-cons; gleaming stainless-steel kitchens, cosy wood-burning stoves and spacious bedrooms with en-suite bathrooms.

“Because we’re in such a special location, we wanted to provide not only accommodation that’s equally luxurious both inside and out, but also a selection of unique ways to help our guests get the most from their time here,” Kerry explains. “Which is why we offer supplements that range from organising tour guides and bike hire, to bringing in a personal chef to cook some unforgettable meals using the finest local ingredients. There’s even a hot-air balloon ride for a truly unforgettable view of the region.”

“Better yet,” she continues, “there’s a great calendar of local events here that make the Dordogne and our Périgord Noir region a great place to visit outside the summer tourist season. From the orchard apple festivals in late autumn and amazing Christmas markets in Limoges and Périgueux; to the annual goose fair in March and Sarlat’s famous truffle festival in January, dedicated to celebrating the Périgord black truffle, this place always has something to enjoy, and never feels like it only comes alive during the months of summer.”

Listening to Kerry enthuse about this beautiful pocket of France, while bearing in mind how many other parts of the world she and Tomas have to compare it with, it soon becomes clear that this well-travelled pair have finally found their ideal year-round home, for many years to come.

Ready to Find Your Dream Home in France?

Browse our property for sale in the Dordogne