Roquefort cheese from the Aveyron 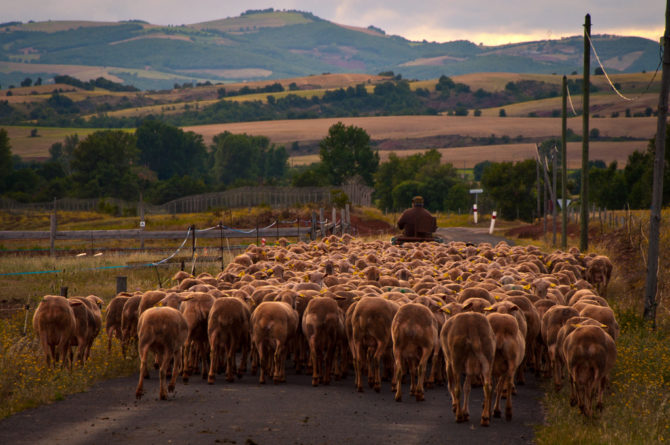 Roquefort is a flavourful ewe’s milk blue cheese and is France’s second most popular cheese after Comté. This is not a bad ranking considering France produces more than 500 different cheeses. Though similar cheeses are produced elsewhere, European law dictates that only those cheeses aged in the natural Cambalou caves of Roquefort-sur-Soulzon in the Aveyron may bear the name Roquefort. Roquefort-sur-Soulzon is located in the Causse du Larzac, a limestone karst plateau, in the arrondissement of Millau, in the south east of the department of Aveyron.

With Stilton and Gorgonzola, Roquefort is one of the three greatest blue cheeses in the world. The cheese is white, crumbly and slightly moist with distinctive veins of blue mould. It has a characteristic odour and flavour with a notable taste of butyric acid; the blue veins provide a sharp tang. It has no rind and the exterior is edible and slightly salty. A typical wheel of Roquefort weighs between 2.5 and 3 kilograms and is about 10 cm thick. As each kilogram of finished cheese requires about 5 litres of milk, Roquefort is high in fat, protein and minerals such as calcium. In a young cheese, the mould is pale and green; it becomes bluer and then grey as it ripens, while small, blue-grey holes begin to form.

The legend says that the cheese was discovered when a young shepherd, eating his lunch of curds, saw a beautiful girl in the distance. Abandoning his meal in a nearby cave, he ran to meet her. When he failed to catch her, he returned to his now mouldy lunch and ate it out of pure hunger.

A cheese like Roquefort is mentioned in literature as far back as 79 AD, when Pliny the Elder in ancient Rome remarked upon its rich flavour in his book. Cheese-making colanders have been discovered amongst the region’s prehistoric relics. Throughout its history, it has conquered the palaces and enraptured the palates of kings and emperors. In 1411, Charles VI enjoyed it so much that he granted the people of Roquefort the monopoly of ripening the cheese in their caves as they had done for hundreds of years.

During the Age of Enlightenment, the French philosopher Diderot attributed the title “King of Cheeses” to Roquefort cheese, declaring in 1782 that “Roquefort cheese is without doubt the finest cheese in Europe”.

Roquefort cheese became known internationally in the 20th century. In 1925 it was the first cheese to be granted the title of “Appellation d’Origine Contrôlée –AOC”, which means Controlled Designation of Origin and is a guarantee of Controlled Designation of Origin on an international level. In 1961, the Tribunal de Grande Instance at Millau (Aveyron) decreed that although the cheese could be made in many regions of southern France, it could only be classed as true Roquefort if it was ripened in the natural caves of Mont Combalou in the village of Roquefort-sur-Soulzon.

Today Roquefort is recognized throughout Europe as “Appellation d’Origine Protégée (AOP)” which means Protected Designation of Origin. Its production is so controlled that when you buy a Roquefort cheese, you can be sure to get an exceptional product. 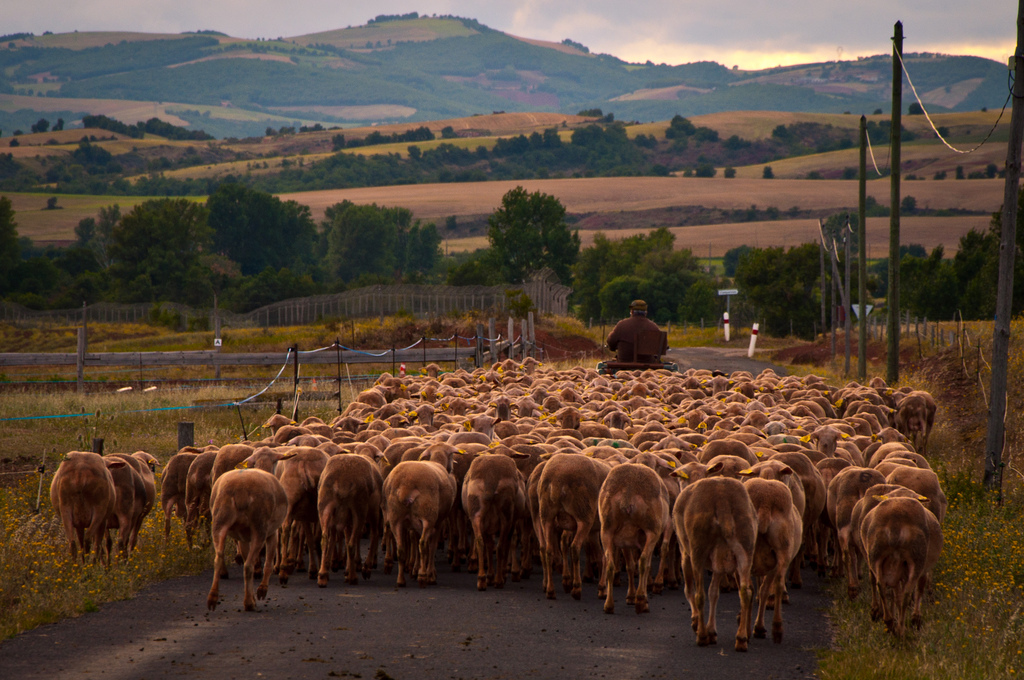 Roquefort is made from the milk of ewe of the Lacaune breed produced throughout the department of Aveyron and part of the nearby departments of Aude, Lozière, Gard, Hérault and Tarn. The name comes from the Lacaune hills in the Tarn department.

Some 800,000 ewe of this breed are dedicated to the production of milk for Roquefort production. They stem from a painstaking breeding process and are fed essentially on pasture and fodder. They yield an average of 200 litres during the lactation period which last 180 days (January to June). This whole, unprocessed and flavourful milk is the essence of the legendary cheese. A single ewe produces enough milk to manufacture 40 kilos of Roquefort throughout the year. Milk is collected by specialised carriers and taken to one of the dairies every morning.

Traditionally the cheese makers extracted Penicillium roqueforti, the Penicillium mould which gives Roquefort its distinctive character, by leaving bread in the caves for six to eight weeks until it was consumed by the mould. The interior of the bread was then dried to produce a powder. Nowadays the mould can be produced and selected in a laboratory, which allows for greater consistency and the selection of the best strains. The mould may either be added to the curd or sometimes injected through holes poked in the rind

The first stage of production takes place in one of the 8 cheese dairies where the milk is analysed and heated to between 26 and 34 degrees without being creamed or pasteurised. Rennet (a natural complex of enzymes produced in any mammalian stomach to digest the mother’s milk) is added causing it to separate into solids (curds) and liquid (whey) and creating spaces for the Penicillium roqueforti to become established. At this stage, the curd is sometimes sprinkled with Penicillium spores, which is essential for the cheese’s unique taste. Two hours after mixing in the rennet, the curded milk is cut into small cubes to eliminate the whey and drained. The curd is then shaped into loaves in special moulds that are turned regularly to ensure the cheese is well drained. Each cheese is stamped to show its origin (the herd that produced the milk, the date the milk was processed). They are then salted in a room at a temperature of 10˚C., and the loaves are put into a salting tub containing dry sea salt for 5 days. After this period, any excess salt is removed during the brushing process. Now that the pampering is over, the loaves are pierced with needles some forty times from top to bottom. Carbon dioxide caused by fermentation escapes and spore-laden air can be introduced to encourage the production of the Penicillium. 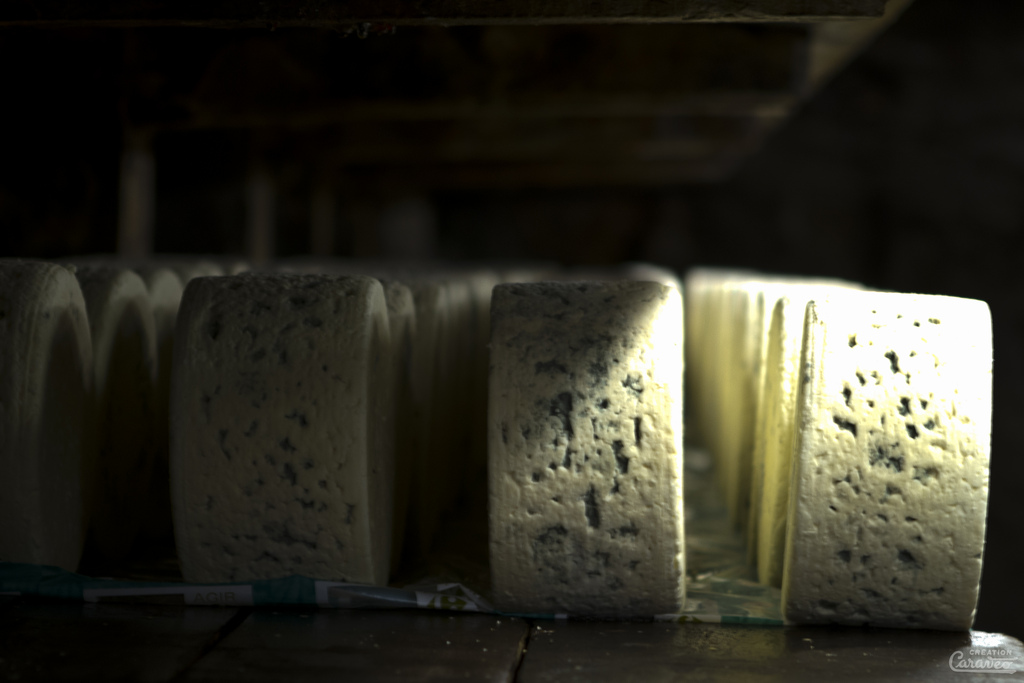 Roquefort is aged and ripened in caves

After all this,the loaves are then taken to the famous Roquefort cellars. This usually takes place 10 days after production.

The Roquefort cheeses are now ready for the gentle ripening process in the cellars, that are naturally ventilated by the air from the “fleurines”, long faults which channel air flows from inside and out and maintains a constant humidity (95%) and temperature (10˚C) all year round.

The cheeses will be left in the caves uncovered for 2-3 weeks on oak wood that capture the humidity. When the caves manager decides that the Penicillium roqueforti has sufficiently developed, the loaves are wrapped in tin foil and stored at a slightly higher temperature to further mature. Roquefort cheese will take a minimum of 3 months to reach maturity. It can be extended by up to nine months.

Finally once it is over and before packing, Roquefort is subjected to quality control tests performed by the ripening master.

There are seven Roquefort producers. The largest by far is Roquefort Société.

Roquefort Papillon and Gabriel Coullet are well-known brands. Their caves can be visited. The four other producers are Carles, Fromageries occitanes, Vernières and Combes (Le Vieux Berger).

Today, some 3.3 million cheeses per year are cured at Roquefort-sur-Soulzon. “Le Roquefort la Petite Cave” from Gabriel Coulet obtained a gold medal at the Salon International de l’Agriculture in Paris (the 3rd one in 3 years).

A Roquefort that is ripened to perfection will have a “buttery” shine overall and be well veined with blue. This cheese is wonderful to present on its own, but just make sure, rest it at room temperature for at least an hour before serving which will make it more aromatic and softer. It is better cut with a pre-warmed knife. It goes well with nut or raisin bread, pasta, salads, walnuts, figs and apples slices and, for an unforgettable taste, serve it accompanied by a sweet Gaillac white wine.

If you have any left, keep it in the lowest shelf in your refrigerator (preferably in the vegetable tray) in tin foil as it will preserve its creaminess and strong flavour and not dry out. Do not put in a container that is too airtight as it needs to keep breathing. As if it was your baby, be careful not to subject it to an excessive number of sudden temperature changes by only taking out the fridge what you intend to eat. Personally I find this final tip quite hard to put into practice and I am sure that after tasting it you will all want a little bit more !

Special Thanks for the help of the General Confederation of Roquefort Manufacturers and Ewe Milk Producers in writing this article.

For further information visit: www.roquefort.fr
•With thanks to David Bolton