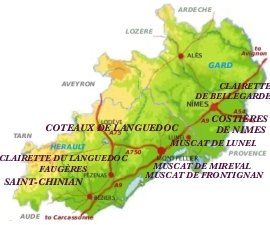 The Languedoc-Roussillon boasts a long, involved history of producing wine, with the sorts of tragedies, betrayals, twists, turns and heartbreaks that read like an epic romance. In recent years this history has engendered a renaissance in the industry, with increased investment, both from those who have lived here for generations and from new world wine makers who have only recently fallen in love with the region. Today these passionate wine makers are doing everything they can to champion Languedoc-Roussillon wines; so next time you’re in the region, or especially if you already live here – take time out to go and meet some of these makers and let them tell you much more than I can about what makes this region so special. For now, though, here are a few notes abut the different AOC wines in the Hérault and Gard departments to kick off your exploration:

Coteaux de Languedoc including Pic Saint Loup and Picpoul de Pinet
As mentioned elsewhere the French wine industry is undergoing some radical changes in the classification of its different territories, and this has lead to a good deal of confusion. This is nowhere more obvious than with the catch all appellation Coteaux de Languedoc which groups together the large group of terroirs in the Hérault department all around Montpellier, and also a couple of smaller terroirs technically in the Aude department (La Clape and Quartourze, see here). The area is vast and the wines made within it encompass all tastes and use all different blends of grapes. Here we will simply highlight some of the main terroirs to give you an idea of what to look for when you’re exploring the area:

Pic Saint Loup – Under the watchful eye of the Pic Saint Loup mountain north of Montpellier for which this area is named, the wines here have an excellent reputation with the strict controls assuring they retain this status.

Picpoul de Pinet – Produced in the area along the Bassin de Thau lagoon south of Montpellier, this lovely delicate white wine is made exclusively from the Picpoul grape and is considered to be absolutely the quintessential wine to drink whilst tasting the locally cultivated oysters in the Bassin de Thau.

Grès de Montpellier – This appellation was launched in 2003 to group together vineyards which produce quality red wines in and around the Montpellier agglomération; it stretches over an area from the middle of the Hérault valley to the Vidourle River, and from the Mediterranean in the south to the Pic Saint-Loup area in the north.

Terrasses du Larzac – Located in the terroir around the Roman city of Lodève, wine has been produced here for centuries, and is now passionately promoted by the dedicated 70 strong producers here.

The three appellations of Saint-Chinian, Faugères and Clairette du Languedoc also fall under the Coteaux du Languedoc umbrella, but as they were established AOCs before the creation of the latter über-group, they have a special status in the industry who sometimes refer to them as crus. Situated to the northwest of Béziers, the Mediterranean influenced terroir here produces intensely flavoured red wines, fruity rosés and, in the case of the Clairette, light white wines.

The smaller communities of Frontignan, Mireval and Lunel just outside of Montpellier and St-Jean-de-Minervoisare west of Béziers home to sweet Muscat wine producers, some of whom do also produce regular non-Muscat wines too. Established as AOC labels from as far back as 1936 (in the case of Frontignan), these wines are elaborated solely from the Muscat Blanc à Petits Grains grape and offer some rather lovely honey and dried fruit flavours which are great for cooking with and also go perfectly with light desserts and starters.

Despite being geographically in the Languedoc-Roussillon, the Costières de Nîmes appellation vineyards are considered as part the Rhone Valley vineyards, as it is felt that the wines produced have more in common with the other Rhone Valley wines. Located in the area between Nîmes and the Rhone delta, northwest of the Camargue, this appellation produces mainly red and rosé wines. These wines were awarded AOC status in 1986, first as Costières du Gard before becoming Costières de Nimes in 1989. Costières de Nîmes wines are the predominant wines produced in the Gard department, and have gained a good reputation as offering good value quality wines.

Since Roman times this tiny AOC area west of the Rhône has produce fine, dry white wines with floral and honey notes, using exclusively the Clairette grape. Although technically situated in the Languedoc-Roussillon, halfway between Nimes and Arles, like the Costières de Nimes appellation in the wine industry Clairette de Bellegarde vineyards are considered as part of the Rhone Valley vineyards.

note – over the past few years there has been a lot of speculation and reports of changes to be made in the AOC system, as yet to be fully clarified – the author apologises, therefore, for any confusion or misleading information, 2010

The variety and quality of Languedoc-Roussillon wines is endless – so, whilst planning your tour of the region, consider staying at one or more of these wonderful places where your hosts have local knowledge of all the best vineyards in the region.