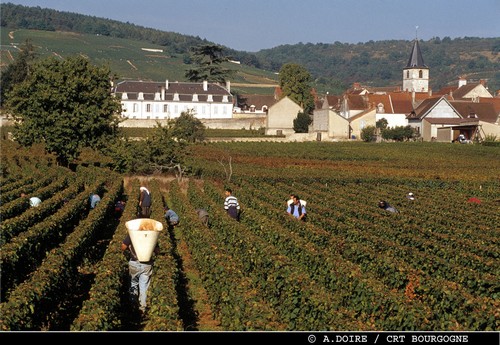 The Côte Chalonnaise covers approximately 25km between Chagny and Saint Vallerin and is named after the town, Chalon-sur-Saône. The soil and terrain on which the vines grow and the techniques used to produce the wine is similar to that of the Côte D’Or. Intensive wine production here is relatively recent, 19th century in fact. The 6 main appellations are Bourgogne Côte Chalonnaise, Bouzeron, Rully, Mercurey, Givry and Montagny are separated by prairies, fields and small wooded areas.

Red pinot noir and white Chardonnay is produced here. This appellation, created in 1923 was discontinued and then reinstated in 1990 to enable the real identification of this pleasant and reasonably priced wine.

Bouzeron white wine is made from 100% Aligoté grapes. A small annual production gives a crisp and fresh white wine, ideal as an aperitif.

A little red and mostly white Chardonnay is grown here. Rully is really ‘The Capital’ of Burgundy for its Crémant de Bourgogne, a sparkling white wine that is produced using the Champagne method. White wine here is mineral and has great finesse.

This pretty wine producing area is to be found at 300m altitude and is the most well known appellation in the Côte Chalonnaise. Mostly red Pinot Noir is produced here. It is interesting to note that this wine ‘terroir’ has 2 different types of wine growing land. The first type of soil contains a great deal of calcium and so the reds produced in this area are have great strength. In the soil that contains more clay, the wines are lighter, ‘rounder’ and more supple. The locals say of the Premier Cru Champs Martin and Clos L’Eveque that they have ‘an iron hand in a velour glove’ combining strength and finesse and as such are as good as lesser Volnay and Pommard wines, just without the price tag!

This small wine producing area was almost swallowed up by urbanisation in the 1960s and was saved by a small nucleus of dedicated vintners. A great deal of work has ameliorated the quality of the reds that are less austere than Mercurey wines. They are supple, deep and ‘round’ wines. The white wine is less well known and lacks homogeneity since it is still in its developmental stage but one none the less to keep your eye on!

Produces only white Chardonnay wine that isn’t very well known but that certainly is well worth knowing! It is the equivalent of the Saint Aubin wine but with a price tag of around 10-13 euros it’s a lot less expensive!

With the Mâconnais area you are entering into Southern Burgundy. Here the wine producing soil or ‘terroir’ is propitious to Gamay red wine production since it contains ancient volcano granite rock and is close to Beaujolais that has the same geological structure running through it.

This world famous white Chardonnay wine will charm your eyes with its golden emerald colours before enchanting your palate with its seductive bouquet and its dry yet round taste! 3 wine growing areas produce different Pouilly Fussé; Vergisson in the North produces a more mineral, fresher type of wine, Soultré-Pouilly produces ‘rounder’ deeper and less austere mineral wines and in the south Chaintré wines are less complex but are more fruitier. Why not taste all three?

The name of the village where this white Chardonnay was produced usually follows its appellation. In general this area of Burgundy is graced with more sun so the wines are rich and when grown on calcium rich soils can have quite a mineral taste that is so typical of Chablis wine. The are of excellent value for money.

This interesting appellation in which two wine growing communities united in 1999, has an excellent wine growing climate and as such produces some excellently rich quality wines. Because of its climate, it’s also capable of producing excellent sweet wines, humidity in the morning and blazing sunshine in the afternoon are propitious to the noble wine bacteria that gives the wonderful Sauternes in Bordeaux!

• Jacquie Boulton-Bridoux with special thanks to Marc Regaine